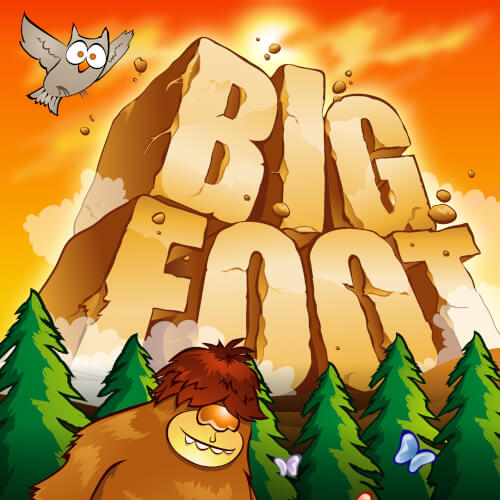 Big Foot online slots casino game is based on the mythical Big Foot – a giant ape-like creature who allegedly inhabits the North West American wilderness. But the game is based firmly in a cartoon-style graphic render, so nothing to be afraid of. Set against a backdrop of green fields, mountains and skies with the sun setting, Big Foot waves hello to you alongside an owl and a racoon.

Founded in 1999, this UK headquartered company, NextGen games, has offices in Australia and Sweden.  Although it has been around a while its name is not as well known as other developers in the industry. Its focus is on business to business transactions so they market games which are customisable by other more well-known companies. You’re likely to have played more NextGen games than you realise..

You can play auto by selecting the number of spins for Autoplay from the slider and clicking Start. Or if you prefer you can play manually one spin at a time.

Triggered by the appearance of three or more scatters earns you 10 free spins. All prizes are doubled during the free spins.

Triggered by three wilds on reels 2, 3 and 4. You get to pick from the five pairs of eyes blinking at you to reveal a cash prize. You can pick up to three times and keep the prize each time. Big Foot wins you the most if you find him.