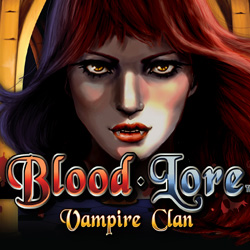 No one could resist listening to the story of the great blood feud between Vampires and Werewolves, whether it would be from films like Twilight or Underworld. Additionally, no one could resist making a large number of winnings on a game that NextGen has developed like Blood Lore Vampire. Once you've finished your time at work, get back home, load up this game on your favourite device, and step into the world of Blood Lore Vampire Clan, where you will play as a werewolf that's on a mission to defeat the vampires and claim your instant prizes!

If you've been a long-time gamer of online casino games and haven't heard of NextGen before, shame on you! They're 1 of the many veteran iGaming developers that have been producing and publishing some of your favourite slot games for years.

What made them one of the most popular developers within the industry is not just their readable gameplay or their big payouts, but also their innovative story narratives and themes that get their fans hooked and glued to their laptops, tablets, and smartphone screens. Many of their previous games such as Dragon Drop, Emperor's Garden, and Joker Jester have received positive reviews in the past, so you can be sure that you'll also be leaving a good review for Blood Lore Vampire Clan too!

If you have watched the movie 'Underworld', then you'll sense a little familiarity with the way the 5x3 grid is set up on your screen. You begin in the misty forest that's illuminated by the full moon, and you end in the dark, gothic home of the Vampire Clan that's set behind your reels.

Your mission in the game is to fight against the blood suckers and destroy the Vampire Queen who wants to rip your heart out , by avoiding the silver bullets that are aimed at your heart. If you manage to manoeuvre out of their way, you'll win up to 200 coins, and end up face to face with the Vampire Queen herself, who acts like a WILD symbol. But don't worry, you'll also have the Full Moon SCATTER symbol to help you gain your victory.

It's not often that you get to find a Gothic slot game that gets you both into the story and its prizes at the same time. Furthermore, it's not often that you'd see yourself as the werewolf fending off vampires after you've done your work at the office! Nevertheless, NextGen has done another fantastic job with this online slot game, where it's an absolute certainty that you'll win more than what you've placed down as your original bet!