Call of the Colosseum 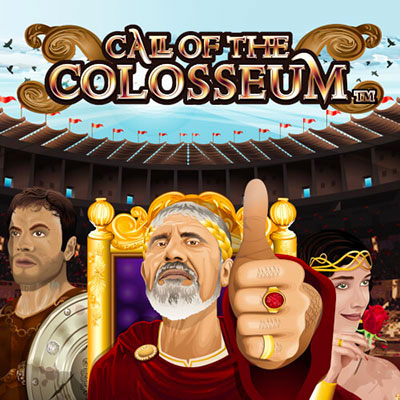 Over 2000 years ago, back in the age when the Romans still had their empire and conquered many of their enemies, the citizens had the grand tradition of hosting games for a number of days that depicts who are the losers and who are the victors. It's quite a bloody and gruesome, due to the fact the losers die and the victors live to fight another day.

These contestants hold the great honour of being called gladiators, and will stride proudly into the arena whenever they are called. Created by the talented developers behind NextGen, Call Of The Colosseum is an online slot game that will get you prepared for battle!

With some of the games that they have developed in the past, such as Merlin's Millions, Golden Mane, and Cleo's Wish, NextGen does not fail in providing all of their players with top quality entertainment, exquisite graphics, and large winnings in every iGaming product they release.

NextGen has landed themselves in the list of top gaming developers in the casino market, not just because of their high-end games, but also the amount of work and effort that they put into them. They call themselves as the 'proud pioneers of platform-independent content', and they have every right to do so, especially after gaining many positive reviews on Call Of The Colosseum!

You mustn't forget that while you preparing for battle in the arena, the great Roman emperor will be watching you from his high perch. That's how visceral the game is!

To add to that realistic atmosphere, the tigers, spears, gladiator helmets, Roman sandles, coin bag, grapes, and the young lady all act as the base symbols that you need to get aligned on the reels to present you with the winning combinations you deserve. However, there are many tricks and traps that can occur in any battle within the colosseum. But there's nothing for you to be afraid of, as these tricks will help you win the battle and be cheered as the winning gladiator!

The Thumbs Up, Thumbs Down Bonus Round can get any player on the edge of their seat, especially as it is a big gamble of whether you'll leave with big winnings or not! Once again, NextGen has done another great job on providing entertainment with the effort that they put into the graphics and music. And along with the big payouts that you could get, Call Of The Colosseum will get any casino gamer at home feel like putting on their armour and grasping their weapon before entering the arena!