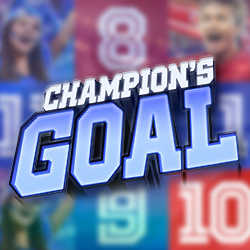 They call it ‘The Beautiful Game’, and this Elk Studios online slots offering certainly lives up to that title.   Take your seat at the heart of the action, and feel the roar of the crowd as the drama of Champions Goal unfolds.  This game has a drive and a pace that rivals that of the great sporting heroes, and you need not fork out for a season ticket, either.

Elk Studios are relatively new on the online gaming scene, but they’ve made an amazing impact very quickly.  This Swedish-based company focus on quality over quantity, and in recent years have developed a small but incredibly polished and impressive library of online slots titles.  Just by playing them, you can tell each of their slots games is a labour of love, and their perfectly realised themes, detailed high definition graphics, and carefully conceived bonus features make each one a gem.

Some of their other titles include:

Champions Goal opens with a short, punchy intro, as we enter a vast football stadium to great fanfare.  Our view of the impressive stadium remains in the background as we spin the 5 reels and watch the symbols fall where they may.  Amongst the crowd of symbols are cheering fans and triumphant footballers, with expressions suggesting they’ve just scored amazing goals.  The layout of the game is a masterpiece of simplicity, with the reels dominating much of the screen, and a large spin button that beckons you to press it.  To the left are buttons for game information and to adjust your bet, and the way these buttons overlay the reels with a fading effect looks really slick and classy.

A unique feature of this game is its use of team colours in the symbols.  The Blue Team’s symbols pay left to right, whereas the Red Team’s pay right to left.

The game’s bonus features include:

The soundtrack is the perfect accompaniment, with a strong and dynamic beat that puts you in an energetic mood.

You’re sure to get a real kick out of this bold, brilliant, and vigorous title.  It really captures the charged atmosphere of a football stadium mid-game, and delivers on graphics, content and bonus features.  Elk Studios have scored with this one!