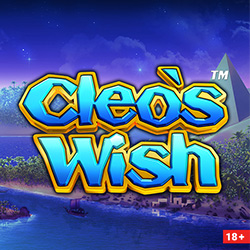 There’s something darkly seductive, tragic and yet powerful about Cleopatra – a self-proclaimed Egyptian Goddess who rose to power in Egypt, and eventually came to a gruesome end. This seductive and powerful nature has been brought to the world of online gaming, in the form of Cleo’s Wish – an ancient Egyptian-themed slot game, which appears quite magical, set on the River Nile.

NextGen Gaming was founded in 1999 and are considered one of the greats of the gaming world. They offer games worldwide, both online and offline, and when it comes to slot games they’re very popular, due to their many bonus rounds, scatters and wilds that they offer. If you’re interested in ancient mythical themes then have a look at 300 shields, A while on the Nile, or Call of the Colosseum.

A five-reel game with up to 25 paylines, Cleo’s Wish is set out like any normal slot game, but it’s the bonus rounds that make it unique. To start with you’ve got the ancient Egyptian-themed symbols like the scarab beetles, ankhs and bracelets, and you’ve also got the logo symbol, Cleopatra herself, and all of the lower value symbols (9-A).

Wild symbol – Cleopatra is the wild and substitutes herself for any normal symbol on the reels, except the scatter. She’ll also award you with 500 coins if you match 5 of her in one spin.

Scatter symbol – the scatter is in the form of a pyramid, land three or more of these and you’ll get 125 coins, plus you’ll trigger one of two free spins bonus rounds.

Cleo’s Parade Free Spins: triggered by 3 scatters, you’ll get a stack of wilds on reel 5, and with each free spin this will start moving along the reels towards reel 1. You can land more stacked wilds in these spins, and they will just keep moving towards reel 1 until the very last stacked wild has reached the first reel. You can get three scatters in this round too, which adds a stack of wilds to reel 5 again.

Eternal Riches Free Spins: the other free spins round triggered by 3 scatters. You’ll get between 5-10 free spins, and you can retrigger the round. If you land a wild symbol that will add 3 wilds to the super spins multiplier, and landing more scatters will add spins to the super spins spin meter (try saying that fast five times). After your Eternal Riches Free Spins are over you’ll then be entered into the super spins (which is where the latter parts come in handy) – the number of spins is set by the spin meter, and the multiplier is set by whatever number is in there. Getting 3 scatters will get you more spins.

There are some other smaller features in the game as well:

Add Wilds Reels: wilds can randomly be added to the reels during any spin.

A straight-forward and easy-to-play game but with a lot of decent bonus rounds that can award you some pretty big wins. As always, NextGen have provided a fun and enjoyable game with a reel that’s great to look at – who doesn’t love a taste of ancient Egypt?!