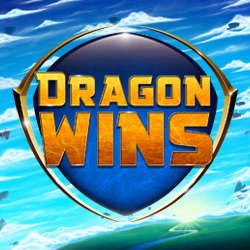 Do you have what it takes to tame the beasts of ancient legend? Many knights have perished in merely the presence of the ferocious Dragons Wild. Will you be the one to conquer this slot? Only time (and a lack of a charred corpse) will tell! Developed by Cayetano gaming, this fusion of fantasy and engaging gameplay will have no trouble getting attention.

This slot features very striking art with a stunning, winding landscape imposed behind the reels. A majestic castle looms in the distance, but the dragons themselves remain elusive. The player must pluck the courage to start spinning to try and catch site of these majestic and deadly beasts.

The reels are adorned with a detailed wooden framework, featuring engravings and mystical markings. The player will be happy to see that the symbols have also received the same level of detail. Those versed in medieval history will recognise classic items synonymous with the theme including swords, gauntlets, gems and the all-seeing Dragons eye.

Founded in 2009, Bulgarian based Cayetano Games is a subsidiary of Paddy Power PLC has an impressive portfolio of 5-reel video slots and 3-reel classic arcade slot machines. For the most part, these all give a balanced output of bonus features and other activities to engage players so if Dragons Wild is lacking in this area, don’t fear! There are plenty of other games to scratch that itch such as Mafia themed ‘Don’s Millions’.

Dragons Wilds is a 5-reel slot with 10 paylines on paper features a simple user interface that works well and doesn’t require much navigation away from the reels so the dragon spinning action can continue uninterrupted. While the UI may be simple, the gameplay can present a much deeper experience for players who know what they’re doing.

The dragon eye that is visible on the reels acts as the wild symbol for the game and will substitute itself to complete winning paylines and net more rewards to the player. Maybe dragons aren’t so bad after all?

Free spins can be won by the player if they land 3 free spin symbols anywhere on the reels at play. The player will then get a multiplier shown at the top of the reel, which will be applied to their winnings during the free spins.

If the player is fortunate enough to land 3 bonus wheel symbols, they will be taken to a bonus side game where they can unlock instant wins. This is they player’s chance to get up close and personal with the game’s jackpot, which comes to a huge 250x their total stake.

Dragons Wilds is a very well presented slot featuring a tidy user interface that doesn’t obstruct from the action. There are lots of exciting and engaging bonus features to keep even the most hardened dragon expert interested, and with a baffling 250x jackpot, it is more than worth braving a few fire-breathing lizards in order to get a chance at winning it.