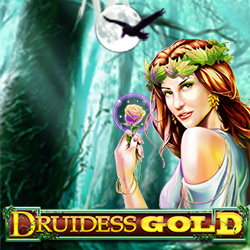 Druidess Gold is not what many punters are used to since it’s a 5 reel, 1,296 ways to win slot. It has a mechanism known as a Reelfecta Reel where the reels in the middle feature four columnscomposed of16 individual boxes on a 4X4 grid.Stakes start from as little as 50p a spin.It’s a magic-themed game with features like free spins,locked wilds,scatters, mega spins, etc.

The features and elements that make up Druidess Gold will have you overlooking the theme because they are just that good.It’s a highly innovative slot that both new and old rollers will love.

Lightning Box Games have been in operation for more than a decade and have managed to establish themselves as key players in developing online slots and land-based slots. They have their headquarters based in Sydney, but have audiences all over Europe, America and Asia thanks to their casino distributors. Lightning Box believes that a quality slot is made up of a balance of a great mathematical model, cinematic audio, magic and striking graphics.

The Reelfecta Reel replaces the usual 3rd reel. This new reel has 16 symbols, which you can use once to form wins. Druidess Gold is a magical place with the reels are set in a secret forest. Game symbols includea Spell Book, a Burning Candle, the Sorcerer, a Full Moon,a Sword and Staff, and Bird, the Druidess, the Druidess Bonus Logo and the card symbols. Chirping birds and fairy-tale-like soundsaccompanygameplay and create a relaxing background.

The Poison Potion doesn’t appear for the first 3 spins, but when it does the ring of protectionbonus round ends.You will end the round with a doublemultiplier for your total bet.

If you fill all of the positions outside the Reelfecta, 4 positionsinside will fill with wilds. Your reward will be a Mega Spin with a full stack of 16 wilds which can create some pretty impressive wins. The free spins will end after the mega spin.

The game has very nice visuals and also has a magical feel. The slot has many symbols, but the reels never feel crowded. Druidess Gold will need a little getting used to before you can know your way through that Reelfecta feature. Activating the Ring of Protection Bonus will be your key to winning.