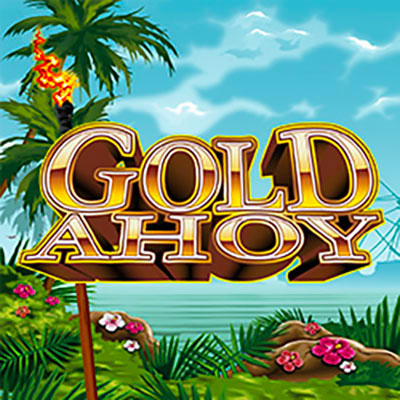 Yo ho, yo ho, the pirates life for you. Introducing Nextgen Gaming’s pirate thrill-ride: Gold Ahoy.  Gold Ahoy is a 5 reel-reel slot with 25 pay-lines, offering countless ways for players to win big. You won’t need a treasure map in this one, the gold is already in-front of you, ripe for the picking.

The jackpot in Gold Ahoy sits pretty at around 25,000 gold coins whenever 5 pirate symbols appear on any of the pay-lines. This pirate is pulling double duty it seems, serving as the wild symbol also, which will substitute for other symbols when matched within the winning pay-line. In-case you haven’t already surmised, this is a pirate themed slot. Expect symbols here to take the shape of a variety of different swashbuckling icons including: parrots, anchors, and gems among others. Time to begin your pirate adventure.

Developer Nextgen Gaming is not only a recognisable name in the online slots industry but is also a prominent figurehead for it’s peers to look up too. With titles such as 300 Shields, to the bloody Blood Lore Wolf Pack, it’s easy to see why Nextgen Gaming is renown as being one of the go to developers for this kind of entertainment, and that’s exactly how they like it.

There is a lot more that meets the eye here. Players wanting to bleed this slot dry will be wanting to utiliseall of the added features here. Wilds and scatters are the sure-fire way of finding one’s path. Free spins are yet another way for players to find solace in winning all the booty. Finding 3 of the map symbols is the key to entering this mode, the same mode where wins are multiplied. Once one activates this feature, they will be taken to an alternate screen where 30 free spins are up for grabs. Free spins can also be re-triggered, making them more of a recommendation than a suggestion in regards to big wins.

Another bonus that is worth talking about is triggered via the matching of treasure chest symbols. The appropriately titled Treasure chest bonus round gives players the opportunity to choose between certain treasure chests that all have something different inside. The chests are randomised, making it a different experience every time one unlocks this feature. Pirates can be relatively greedy when it comes to gold, but here they seem to be quite happy to let you take it all. It is very rare that you’ll find a slot that has its own specific features, but low and behold, Gold Ahoy has it covered.

Gold Ahoy is yet another feather in the cap of developers Nextgen Gaming. Players who have played any other game in the Nextgen catalogue will find similar, if not identical footing here. The theme is on point, as is the various gameplay that surrounds it. We were very impressed with Gold Ahoy, and so should you. Play now. 8/10