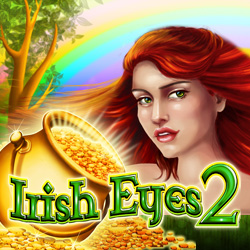 Despite how the name of this game sounds, this isn’t about scratching someone's eyes out, but actually about playing an Irish themed scratchcard. What is more, it’s based on the successful Irish Eyes 2 slot machine we reviewed earlier, with this acting as a  sort of alternative.

The design and rules of this title are much more basic than that of the slot machine version, but in some ways this makes for a more relaxed playthrough. In the stripping away of some details, such as the visually stirring iconography of the background, the game has gone back to basics. It gives us a pure form of iGaming.

If you’ve played a NextGen title before or read our last review, you’ll like know a great deal about this developer. However, if you’re new to the community and have no idea of the history behind this label, allow us to help you out. Back in 1999, NextGen Gaming became one of the few to start creating online casino titles, with the goal to create innovative gaming.

As you can see for yourselves, they’ve managed to do that for the last two decades, with the Irish Eyes scratchcard being but one example of this. NextGen has been able to make a name for themselves both online and in land based establishments, thus making them a leader within their field.

We open on a similar backdrop as previously seen before, though this time the majority of the interface is dominated by the scratchcard tiles rather than the forest aesthetics. That being said, while the forest becomes less important, the redheaded girl takes centre stage, as the main picture of the unscratched squares.

Playing these tiles is simple enough, with you needing to match three of the icons in order to win a prize, with the paytable displayed beside the grid. Just as with the slot game, there’s both low and high value symbols, with the redheaded women the golden jackpot at x1,000 of your wager. Nevertheless, that isn’t to say that a mini game isn’t lurking upon the tiles of this card…

Some of you may be wondering why this game is even necessary, given how easy to play video slots normally are. To that however, we’d say that Irish Eyes delivers something that its counterpart can’t: a fast paced game. You’ll know within a matter of seconds whether you’ve won or not, thus making the game uncomplicated and easy to adapt to.

There are quite a few other titles like this from NextGen Gaming, not to mention the attractive qualities of their iLottery activities. If you’re interested in trying them out, there’s numerous NextGen powered casinos, accessible on mobile and desktop for your convenience.