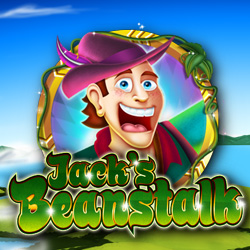 As far as fairy tales go, Jack and the Beanstalk is one of the most well known; it has action, drama, suspense and, most importantly, a happy ending. Should you have ever wanted to play the role of Jack himself, risking all that he owns to reach new heights, then you can do so thanks to NextGen Gaming.
The main quest for Jack’s Beanstalk is to obtain a jackpot of 600,000 coins, arguably a windfall that’ll set Jack, aka you, up for life. This is the ultimate form of storytelling, with you able to shape the way the tale pans out - will it be a happily ever after, or could a tragedy be lurking on the horizon? Only by climbing that beanstalk will you know.
Quick Links: Online Casino | Casino Games | Starburst | Gonzos Quest | Immortal Romance | Reel Rush | Twin Spin | Blood Suckers

From the first time they opened their doors and started creating online games, NextGen has been passionate about what they create. That passion has been harnessed over the last two decades, resulting in a wide display of iGaming titles, beyond that of just slot machines. The motto of the brand is that they Attract, Entertain and Retain; it’s an uncomplicated objective, but it’s proven most prosperous since that first day back in 1999.
In regards to where NextGen sits in the grand scheme of gaming nowadays, the label is based in Las Vegas, one of the main gambling destinations of the entire world. But there’s more, as there’s six continents that are home to offices of this developer, helping to keep them on the top spot.

Made up of 25 winlines, all of which can be decreased for your preferred dynamics, Jack will start off high above his village, having already climbed that beanstalk. The way the aesthetics has been designed is to give a storybook vibe, with the imagery providing a sort of window to childhood.
Of course, now that we’re high in the clouds, we need to work out how to unlock the unique features of this whimsical world. Despite there being so many winlines, the number of symbols is quite compact, however that doesn’t mean that the bonuses aren’t special in their own way.

Even though the graphics could have been made more contemporary, to connect with the newer generations of gamblers, Jack’s Beanstalk brings to life characters we’ve known since childhood. It isn’t necessarily the highest variance game, but the bonuses are so unique to the theme that we don’t mind the lack of diversity as much as with other titles.