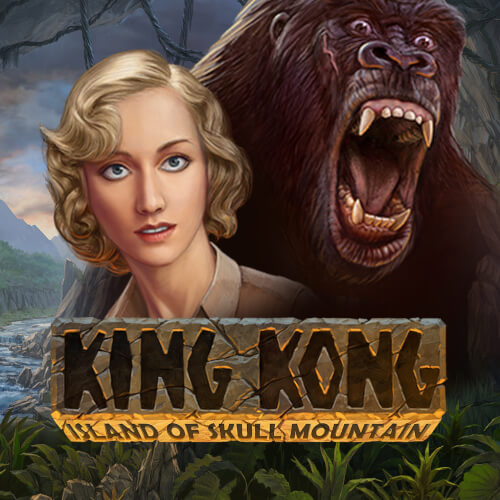 King Kong first roared onto screens back in 1933, following a film crew and their crazy director to Skull Island, where the giant ape lives. Surprisingly, the ape falls in love with the leading lady (who knew?), and it all ends with them capturing Kong, taking him to New York, and him falling to his death from the Empire State Building. That’s the story in a nutshell anyway.

But you don’t have to worry about giant scary apes, weird romances and tragic deaths when playing the film-inspired King Kong slot game; you just need to keep your eye on the prize (or prizes).

Playtech is a gambling game developer that was founded in 1999 and is headquartered at the Isle of Man. As can be seen from their games portfolio, they love movie-inspired slot games like King Kong – just take a look at their other games:

Playtech do these games justice with their innovation, creativity and high-quality graphics and animations. No doubt they’ll continue to be at the forefront of online gaming.

This game is inspired by the 2005 remake of this action classic, and you’ll be treat to a great intro clip, including snippets from the film. The reels are also filled with familiar cast members from the film: Jack Black, Adrien Brody, Thomas Kretschmann, and Naomi Watts – who is the highest-value cast member on the reels (match 5 of her in one spin and you’ll get 1000 coins).

The game is set on the backdrop of Skull Island, naturally, and plays to an action-fuelled soundtrack. There’s also two base games, depicting the main scenes of the film: one game is played in Skull Island (jungle mode), another in New York City (city mode). The wins are the same, but the bonus games are different.

Wild symbol – Kong himself is the wild symbol, and he’ll substitute for any other symbols on the reels, except the scatter. Match 5 of him in one spin and you’ll get 3000 coins, match 3 or more and you’ll trigger the bonus round.

Scatter symbol – the Kong logo is the scatter, land three or more of this symbol and you’ll trigger another of the bonus rounds. The round depends on the base game mode you are playing.

Wild Jungle Respins Feature – you’ll get 3 free spins, and whenever you land a wild it’ll freeze until the end of the feature, giving you lots of opportunity for winning combos. You can’t trigger any other bonus features within this round.

Skull Island Bonus – you’ll be presented with a map of Skull Island, where you have to choose a location and find Kong. Kong gives you the biggest prize; however, if you find 3 creatures, you’ll still win a prize.

Wild Kong Respins – you’ll get three free spins, and in each spin the wild will appear across two reels, substituting for all other symbols except the scatter.

You can’t retrigger other bonus features within this round.

City Tower Bonus – this will take you to the famous scene at the top of the Empire State Building, where Kong is under attack from planes. You’ll have to choose one of three planes, and you’ll get three rounds – each plane is worth a prize. Once you’ve completed your three rounds, the bonus will finish and you’ll enter into jungle mode.

This game is an epic slot game, with movie clips, interactive bonus features, and the two base games with different bonus rounds keeps it interesting for the players. The graphics and animations are high quality, and the whole gaming experience is great. This King Kong slot is definitely worth a play.