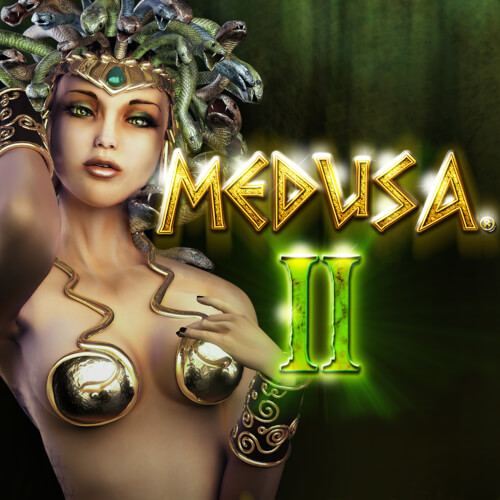 MedusaIIonline slots casino game is NextGen Gaming’s upgraded Medusa online slots. If you loved that one then you’ll love this one too. The graphics are upgraded and there’s no more mournful singing by men who’ve been lured by Medusa’s attractions. The sound track to this game is warlike and beat heavy, making you feel strong and ready for anything.There are also different bonus games.

Founded in 1999, this UK headquartered company, NextGen Gaming has offices in Australia and Sweden.  Although it has been around a while its name is not as well known as other developers in the industry. Its focus is on business to business transactions so they market games which are customisable by other more well-known companies. You’re likely to have played more NextGen games than you realise.

There are the usual playing cards at the lower end of the paytable. Then there’s a ring, a quiver of arrows, a statue bust, gold serpent and serpent filled helmet at the top end.

Click the cog icon and then select Ito view the rules and paytable.

Click the cog and then the coins to place your bet using the slider provided.

Click the cog and then the Auto symbol to choose a number of spins from the slider if you want to play auto. Or you can play manually one spin at a time.

When you spin in the main game or Medusa’s Locked Reels Free Games, any two, three, four or five reels may randomly lock and spin together the same symbol. If they do you’ll see Medusa fill the reels while they lock.

Triggered by three or more scatters, you’ll earn ten free games. During the free games, Medusa’s Locked Reels may trigger. You can win up to five more free games.

Medusa II online slots casino game is fun to play and easy on the eye. With strong background music and drumrolls when wilds and scatters appear, you’ll enjoy leaving the soundtrack on for this game. With 243 paylines instead of 25 in the original game, you have many more chances of making a win and at the very least of having more fun. If you enjoyed Medusa and Medusa II, you’ll probably also like: