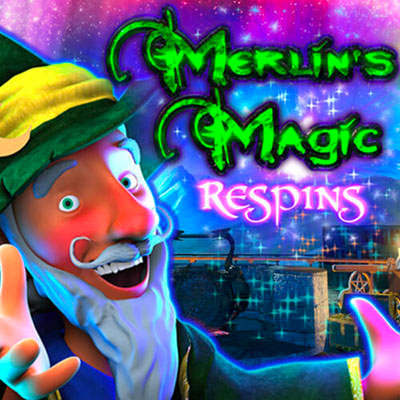 Have you always wanted to practise magic? Well, you’re in luck! Merlin is back and he’s looking for a trainee. Making his debut in the popular slot game Merlin’s Millions, the story continues where it left off. So if you liked the first one, you’re going to love Merlin’s Magic. Work alongside this wonderful wizard in his mystical lab and experience all things magic from his trustworthy spell books to his selection of potions and mixing cauldrons.
Just like the game’s theme, the slot has been made to look magical. With premium graphics such as a beautifully drawn Merlin standing on the left-hand side of the screen and a mystical-sounding audio played during ever spin – we’re big fans of this game by NextGen.

NextGen are known for their versatility when it comes to slots, that’s because they produce games for a number of different audiences. Therefore, it doesn’t matter if you’re new to the online slot world or you know every trick in the book, you’re bound to find a slot to suit your gaming preferences. The Enchanted Mermaid, Medusa and Unicorn Legend are a few of their most popular titles, while slots like 300 Shields and A While on the Nile are adored by history buffs. Overall, all of their games have one thing in common – they’re extremely fun to play.

Merlin’s Magic is a 5-reel, 50 payline sequel slot. Yet magic isn’t the only key to your success, you also need to work out which symbols are the most valuable. The low symbols come in the traditional slot form and are represented by the number 10 alongside the letters J, Q, K and A. They are also a range of high value icons, which all relate to the game’s sorcery theme – these include a goblet, a scroll and a spell book.
Merlin is the slot’s WILD and stands in for every other symbol, apart from the SCATTER (the cauldron). This friendly-looking wizard can be found on reels 2, 3 and 4, if he happens to land on all 3, the WILD Re-Spin will be activated. The SCATTER, on the other hand, will trigger the Free Games bonus. So, if you see 3 SCATTER symbols on your reels this will generate 7 Free Spins. Just like Merlin Millions, the game also has a Gamble Feature where you’re wins can be doubled or quadrupled! For those looking to win big, the SuperBet round will be your best friend. This is activated when stacked WILDS appear on reels 2, 3 and 4 and can lead to some real big winnings.

Adored by many for its sensational graphics and detailed storyline, Merlin’s Magic has all the components of a top-notch slot game. After the success of its prequel Merlin’s Millions, this slot is bound to attract fans of the first instalment, especially with the return of its much-loved wizard. Plus, the slot is much more advanced in terms of graphics and game-play, making it all the more attractive to former fans.