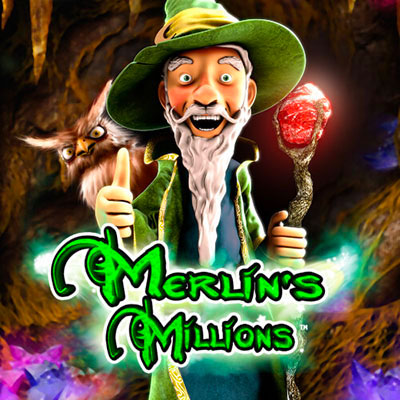 This slot tells the story of Merlin, a wizard who works for King Arthur. As a good sorcerer, it’s his duty to protect the King of England and his empire from the surrounding evil. Not only is he there to defend the king, but he’s also there to help you find your fortune. Watch in amazement as he puts his magic to good use and rewards you with cash prizes.

As for the game’s setting, Merlin’s Millions places players inside a fictional forest filled with eye-catching jewels and appropriate sound effects. Don’t worry – Merlin will be there to guide you every step of the way as you’ll find him stood on the left-hand side of the screen. You won’t miss him either, dressed in a striking green cloak and hat he stands out on the reels.

NextGen are extremely passionate about their games, and this shows in the quality of their designs. They’re not new to the gaming world either, coming onto the scene in 1999, NextGen have a large portfolio of games to be proud of. They reputation means their games can be found in over 100  internet casinos, some of which include William Hill, Sky Bet and Betfair. Now throw in top-of-the-range graphics and innovative game-play ideas, and you’ve got one of the most accomplished gaming companies around.

With a 5-reel, 5 paylines set-up, players should start by setting their betting levels. Once completed, it’s time to enter a world of magic where Merlin will help you win rewards. However, in order to win you’re going to have to do some studying of your own, and by that we mean finding out which symbols are the most valuable. The game’s top-earning icons are – the purple potion, the red-topped wand and spell book. They are also lots of bonus symbols including Merlin (the WILD), an owl (the SCATTER) and the blue orb (also a SCATTER).

Each bonus feature comes with its own benefits. The Free Spins bonus is triggered when you see 3 blue orbs land anywhere on reels 2, 3 and 4. In return players will receive five Free Spins, which can increase with the help of your trusty wizard. Merlin will then use his wand to turn reel into WILDS, giving players a greater chance of upping their total.

The Owl Bonus is quite similar, but you’ll need to see 3 owls land anywhere on reels 1, 3 and 5. This will turn every position on the reels into an owl, each one hiding a prize. Players will keep choosing the owl until they pick one instructing them to collect. Then, there’s the SuperBet where players can make some real money.

If its mystical theme doesn’t lure you in, its beautiful graphics will! You’ll also find fitting sound effects and Harry Potter-inspired icons including a spell book, owl and Merlin of course. You won’t get bored playing either, with a pick of bonus rounds and a SuperBet feature, you’ll be making money in no time.