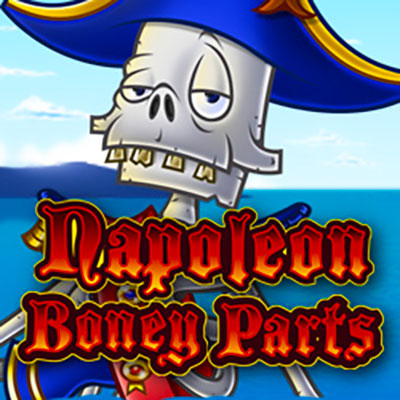 If the thought of conquering the world excites you, you can do just that with Napoleon Boney Parts. This epic slot game comes with a light-hearted theme centred on the military leader, Napoleon Bonaparte. However, the hero in this game is somewhat different, given his boney appearance. Ridiculing the original story, the main character is a skeleton who has returned from the dead to make his mark on the world by causing devastation.

In order to do so, he will need as much help as he can get. So that’s where you’ll come in. Don’t worry, your assistance won’t go unnoticed, if you manage to lead him to victory you’ll be generously rewarded with lucrative pay outs. The reel design is exactly what you’d expect too – set against a clear sky backdrop overlooking a bright blue ocean with Napoleon Boney Parts at either side of the reels. Not to mention, a heap of skulls positioned at the bottom of the screen.

In terms of gaming developers, NextGen are up there with the best. Whether you’re playing for real money or fun, the quality of their graphics and ideas behind their game-play will keep gamers playing for hours.

Avid gamblers will definitely recognise their games, and what’s even more interesting is the fact much of their slots are licensed under other companies, so players may not even realise they’re playing one. With over 100 games to be proud of, it’s fair to say they have a pretty impressive portfolio. Not to mention, most of their slots can be found in some of the world’s top online casinos.

This game comes with a standard 5-reels, 25 pay line layout with a good selection of icons all related to crime. The highest symbols are the two wives, a ship, a group of skeleton soldiers and a map, while Napoleon Boney Parts acts as the game’s WILD. Replacing all game symbols, excluding the Scatter he holds great power. The SCATTER on the other hand is represented by the golden emblem.

The main bonus feature is the Boney Parts Feature. This comes into play when 3 WILD icons land anywhere on the reels, and will activate a mini-game. Napoleon Boney Parts will appear in the middle of the screen and players will be expected to remove his bones. Each bone removed will reveal a cash prize with the chance to win even more rewards if he falls over. With only 3 picks, make sure you choose carefully. You can also add to your total through the Free Spins round and Gamble Feature. Be warned – the gamble feature can be risky and one wrong guess could result in no winnings.

This game may have an underworld theme, but it’s hardly sinister. Filled with colourful graphics and funny-looking animations, the slot has a light-hearted feel throughout. And when you’re not admiring its interface, you’re bound to reap its benefits. From high pay outs to fun features, Napoleon Boney Parts is as exciting to play as it is to look at.