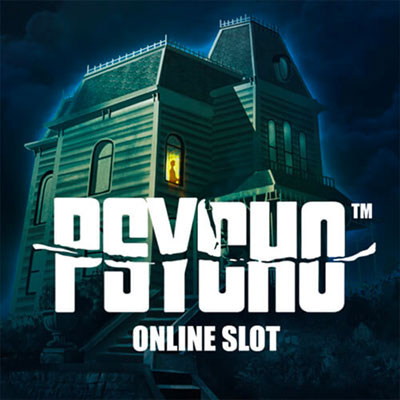 Based on Alfred Hitchcock’s classic psychological thriller, NextGen Gaming’s Psycho slot is a must-play for film fanatics or fans of darker themes. Staying true to the cinematic great, this is a game that’s not for the faint-hearted, complete with a frightening soundtrack and a set of sinister animations that will keep you on the edge of your seat. Featuring iconic visuals and chilling quotes from the film, you may well feel nervous as you spin these reels, but fear not – if antagonist Norman Bates does jump out onto your screen, it’ll only be to award you with WILDS and cash rewards.

The graphic elements in this game might be scary, but it’s because they so impressively depict the eerie setting of Bates Motel. The neon lettering of the sign flickers ominously and rain pours from the dark cloudy skies. Creepiest of all is the Bates mansion itself, perched atop its slope with a strange shadowy figure waiting outside. If you’re a fan of thrillers, deposit today and spin the reels to take your chances with the Psycho himself.

Australian software provider NextGen Gaming are experts in video slot development, with nearly 20 years of experience under their belt. They have released a whole host of popular games including the likes of Foxin’ Wins and Medusa and are always being innovative when designing and releasing new slots. NextGen Gaming know how to keep the players happy and put a lot of intricate detail into their games to make them visually appealing as well as entertaining. Once the graphics have piqued your interest, NextGen offerings keep you engaged by including plenty of great bonus features.

Psycho is a 5-reel slot with 25 paylines, but of course, that’s not all. This game is packed with additional features to make it as much of a thriller as its 1960 Hollywood counterpart. The PSYCHO WILDS feature in the main game means WILD symbols can be added to any spin following a frightening animated sequence. Your fear will soon turn to excitement if you score a multiplier, as wins with WILDS during the base game may be multiplied by 2, 3, 4, 5, 10 or 20.

NextGen’s Psycho is a real treat for film fans and slot enthusiasts alike. Added features such as animations and bonuses in the base game put this video slot heads above the rest as it’s packed with engaging extras that make a big difference to gameplay. Try it for yourself… if you dare!