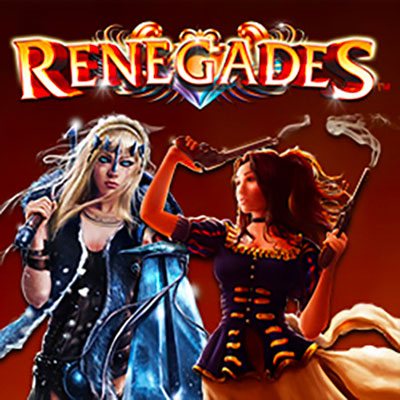 Join the 5 beautiful renegade warriors, each from their own time and land, each as powerful and majestic as the next. Set atop a snowy mountain scene, we meet the 5 heroes, Freya (Valkyrie of Valhalla), Valda (Dragonslayer), Harriet (Hellstorm), Raffaela (Blaze) and Ivy (Sabreclaw) as they join forces and come together from their respective lands, onto our reels. Nextgen Gaming have created these life like animated queens with spectacular attention to detail, using the highest quality graphics to bring the renegades to life. Will you join these valiant women in their quest and become a renegade yourself?

Nextgen Gaming has one of the best reputations in the industry and since their inception in 1999 into the online gaming industry, they have proved themselves a force to be reckoned with. They serve an enormous worldwide marketplace with some of the best graphics and most impressive games the industry has seen. Each time they release a new title it is met with an excited audience, knowing the stellar reputation the company has. Players return to Nextgen titles time after time, confident that they will experience top quality, engaging and entertaining gaming.

The mysterious renegade characters are all warriors in their own right. Freya of the Valkyrie is a hotly contested figure, some saying she was not of the Valkyries, others that she was. She was descendent from Odin himself and a powerful Queen over snow and ice in this game. Harriet Hellstorm takes the title for Queen of the skies and is a decorated Air Force major, the fear of all her high-flying enemies. Next, we have Valda Dragon Slayer, fearless knight and slayer of dragons. Raffaela Blaze is the great, gun slinging heroine of the revolution and a force to be reckoned with, like the rest of her renegade sisters. Finally, Ivy Sabreclaw is the Princess of the Forest and can call the fearsome forest dwelling beasts to fight alongside her.

Join these proud warriors in their battle and reap the rewards:

This Nextgen Gaming creation is yet another adventure packed, simplistic yet engaging success! Lovers of comic style animations and fantasy adventure will love this immersive, action filled game. The graphics are top notch and a credit to Nextgen Gaming online slot games.