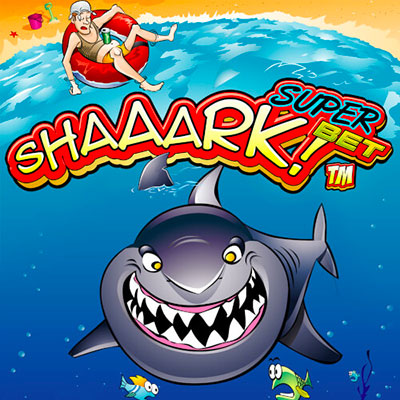 Watch out, there’s a shark about! Keep a sharp eye as you swim through this NextGen Gaming online slot game, where Jaws may be lurking. These reels feature a chomping shark, a surfboard with a giant shark bite, the no swim beach signs to warm you of the danger, a floating man apparently unaware of the danger beneath, a wary seal leaping out of the water and that terrifying sight of a shark fin popping out from the waves. All this is set against the scene of the beach and the water, complete with a lighthouse and a screaming woman. Enter the water if you are brave enough and keep an eye out for that fin!

Since 1999, Nextgen Gaming have been providing the industry with some of the best online slot games on the market. In 2001 the company was bought by industry goliath NXY Gaming, and Nextgen Gaming has since gone from strength to strength. They have been providing quality entertainment for players of all levels for over two decades and have no signs of stopping. If you loved Shaaark! check out some of their other titles:

Our innate fear of sharks became realised on the big screen with the 1975 film ‘Jaws’ directed by Steven Spielberg and based on the 1974 novel ‘Jaws’ written by Peter Blenchley. The story features and giant man-eating great white shark that starts attacking and eating beachgoers, beginning a hunt to kill the shark by a local police chief, a marine biologist and a professional hunter. The ominous and simplistic music associated with the film actually came about due to malfunctions with the robotic sharks and Spielberg has the difficult task in suggesting the presence of the shark where they could not use the technology. That haunting music is now the soundtrack to our greatest seaside fears!

If you are brave enough to jump in for a swim with Jaws, let Nextgen Gaming immerse you in this online slot game ,Shaaark!

This shark attack themed online slot game will have you jumping out of the water and running for the beach, but not until you’ve won some prizes in the extra features for this game. The game is engaging and fun, typical for a Nextgen Gaming title and you are bound to love it and play again and again.