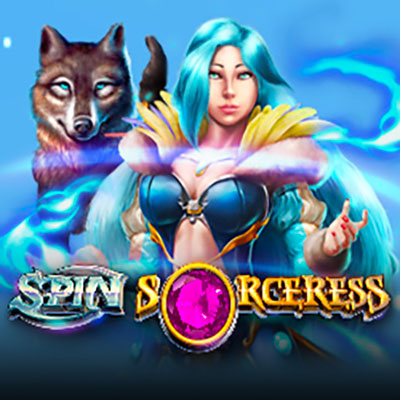 The unforgiving yet beautiful terrain of the Arctic is merged with a Sorceress’s supernatural powers in this excellent online slot game from Next Gen. Although the Sorceress showcases her powers through her randomly triggered Wild Reels and Free Spins features, it is NextGen’s creative Super Bet feature that caps the excitement as players can toggle their coin bet to up the RTP to 97.14%.

NextGen have more than two decades of experience in creating original online gaming content that has taken the industry by storm. This online gaming pioneer started out in Australia and were later bought out by gaming supremos NXY Gaming in 2011. Although the words ‘innovation’ and ‘creativity’ are often over-used, NextGen can legitimately claim to draw on these skills to bolster their portfolio which already includes hugely popular games including Wonder Hounds, Samurai Spirit, Judge Dredd and Foxin’ Wins Christmas.

Spin Sorceress game is a chilly looking artic-themed fantasy online slot from the creative sorcerers at NextGen. The five-reel game-board is suspended against a snow-capped mountain scene in silvery pale blue tones. Higher-paying symbols reflect the overall theme and include a handsome sled dog, a crystal ball, a blue gem and a pink flower. Special symbols are a blue-haired artic sorceress who is wild and fills in for all other symbols except except for the ornate slate scatter symbols.
Sorceress Wild Reels
The sorceress can appear during any spin to transform one or more sets of reels (from two-four) into stacked wilds for cold hard wins.
Sorceress Free Spins
Land three or more scatter slate symbols to trigger the Sorceress Free Spins feature. You will receive ten free spins which can be retriggered by spinning more scatters.
Super Bet
With this unique feature from NextGen, the sorcerer’s power is put in the player’s hands. Click the Super Bet button to choose your betting level - the higher the coin bet, the higher the RTP:
Gamble
Winnings can be gambled up to five times on the turn of a card. Bet on the colour or suit of the next card to win 2x or 4x your sake respectively.
The magic of Spin Sorceress has been optimised for mobile devices as well as their desktop counterparts.

Spin Sorceress from NextGen definitely doesn’t leave gamers cold with its icy fantasy theme. The visuals are crisp, while the twinkling audio adds to the arctic atmosphere. Gameplay shines with Sorceress-themed features but the innovative Super Bet feature is the real jewel in the crown as the bravest players can customise their bet to enjoy a magical RTP of up to 97.14%.