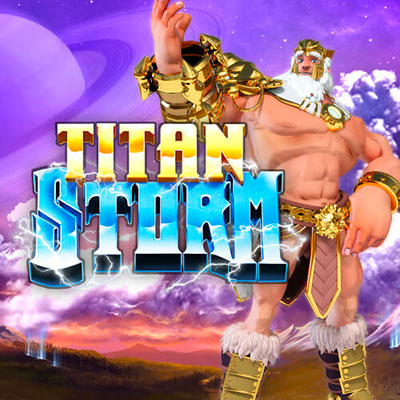 Enter in to ancient Greece, as you bravely ascend Mount Olympus in search of eternal glory as you meet the great immortals. There is a storm brewing in the heavens and you must work alongside the mighty Olympian God and Goddess, Zeus and his daughter Athena, to make the big win’s rain down upon you.Play aside mountains and magical skies with mythical beasts, swords and Gods spinning alongside you in the reels. Let the epic soundtrack and heavenly backdrop immerse you in the action and lead you in to the land of the Titans.

Nextgen gaming have proved themselves again and again to be true innovators in the online casino gaming industry, with new and engaging releases that keep the players wanting more, and the other industry leaders running back to the drawing boards. Their dedication to top quality graphics and designs makes their games beautiful to play as well as keeping the player immersed in the action, with realistic themes, settings and sounds, that draws you in to the game. Titan Storm is another such title, and is a true casino slot classic.If you love this game why not check out some other Nextgen games:

In ancient Greek mythology, the Titans were a terrible and powerful giant like deities that reigned in a unruly and chaotic manner. They preceded the Olympian Gods, who eventually defeated these Titan monsters, who were hell bent on creating chaos and resisting order. There was a great battle, the Titanomacy, in which the Titans where defeated and ultimately imprisoned my Zeus who banished them to the deepest parts of the Underworld so that he could restore order in the universe. This ancient Greek tale was reimagined in the Disney classic Hercules, where the Titans are released from their underworld prison and wreak havoc upon the earth once again.

In this game, you will be whisked away to the land where the Titans caused such chaos and help Zeus and Athena restore order by cashing in. It may have been tough to ascend Mount Olympus but getting to grips with the Titan Storm online slot game certainly isn’t:

This Titan Storm online slot game is a hit, giving the player ‘reel’ satisfaction and fun again and again. The classic ancient Greek characters, and the cool Olympian style graphic and music make this game all the more enjoyable and will have you spinning all day.