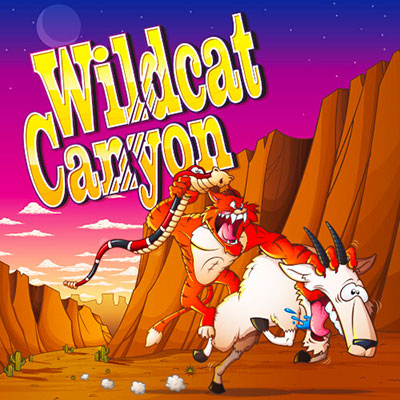 This lonesome canyon may look desolate at first, but it’s actually home to a friendly group of wildlife, who live in fear of the wildest resident – an angrywildcat with razor-sharp claws!  Don’t worry, though, you aren’t in any danger as you spin the reels, and the wildcat’s appearance is more lucky than worry-some, as he often heralds big wins!

NextGen were born in 1999, just before the new Millennium, and as their name suggests, they are always looking towards the future.  They are innovators in online casino content and land-based gaming.  Their online slots games, too, contain some of the most creative and outside-the-box thinking on the market today.  Though their games are sure to delight veteran slots players with their core features and winning opportunities, clever twists on classic bonuses keep players new and old surprised and delighted.  And of course, their games feature High Definition graphics and stellar soundtracks, too.  Some of their most popular titles include:

The 5 reels and 3 rows in Wildcat Canyon make a total of 25 win lines, the number of which the player can adjust to their liking.  The backdrop to the reels is a lonely-looking canyon, with sand and cacti stretching into the distance towards a vast blue sky.  It’s atmospheric, and sets the tone of the game nicely.  On the reels, things are more animated and comical, with cartoon symbols including a red snake, a goat and a buzzard, all in startled poses (presumably upon seeing the wildcat of the title)!

This game has a Theoretical Return to Player of 95.461%, which should keep things rolling along nicely.  You can also set the game to between 1 and 100 Autospins, if you’d like to put your feet up for a while and watch the wildlife interact themselves.

Wildcat Canyon is a clever and humorous title from NextGen that will have you purring with delight.  It has all the bonus features we’ve come to expect from the best NextGen online slots, and a consistent and immersive theme that will have you chuckling as you chase those wins.  A wild title indeed!