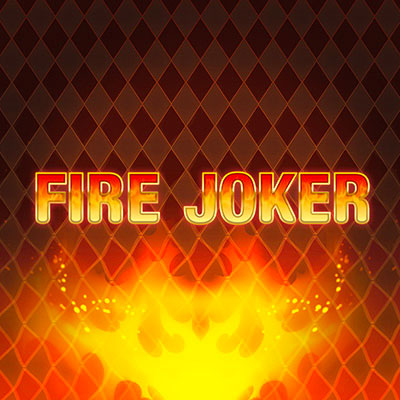 Cheeky Is Putting It Lightly…

Fire Joker is online casino slot game from developer Play N’ Go. This is currently one of this developer's most popular gaming title of 2019. This is a game that gives players the chance to win hundreds, if not thousands of pounds, from only a handful of spins. Well, that is if you’re playing the right way. Fire Joker is played by people across the globe. They play for the fast-paced gameplay and lucrative bonuses. These are the aspects of the game which make it such a rewarding experience!

This is a slot that is playable on both mobile, laptop and desktop devices. What this means is you can play it anywhere and at any time! Playable from as little as 5p to around £100 per spin, Fire Joker is a 3 reel by 5 reel thrill ride from start to finish! In terms of difficulty, we have to say that this is arguably one of the easiest slots to grasp and master. It uses a simple 3x3 layout, it is back-to-basics from Play N'Go!

Pretty much anyone can pick up and play this slot, which is part of the game's charm! But that doesn't mean it's boring. It's simple, fun, fast-paced slot action, the way it was meant to be enjoyed. Want to learn more? Check out the rest of the review below for more info on Fire Joker!

About The Developer of Fire Joker: Play N’ Go

Swedish developers Play N’ Go love to innovate the genre of online casino games. We are always excited to see what they plan on releasing next! Fire Joker is an example of where this developer has taken a simple concept and reinvigorated it. The game takes tradition and gambling culture and brings it back into the twenty-first century.

As of 2019, Play N’ Go has over 50 unique games in their catalogue. That’s 50 games that you have to try before you die! Most, if not all of their titles, are playable on both mobile and desktop devices. Meaning you have a lot of options right there in terms of how you want to play and when you want to play. You can play if you are on the bus to Yoker, or on a plane to Edgbaston to see the cricket.

One thing that’s great about this developer is that their games have well over 30 language options available to players. This makes their games instantly accessible to players from all four corners of the planet. And, this is what is partly responsible for their worldwide appeal in recent years. Check out any of the following games:

And many, many more!

Let’s start with the visuals of Fire Joker and what one might be able to expect from this slot. The first thing players should know is that this slot uses a colour palette, which consists of a lot of red and yellow. It's bold and pretty, and it jumps right out of the screen! The visuals are all part of the fun. This game identifies that the most important part of the online casino gaming experience. the colours take you on a trip to Las Vegas, where the lights are bright and the colours are bold.

It would seem that simplicity is key to the success of this slot. Play N’ Go have clearly wanted to make an accessible, easy to understand, slot game. This game can appeal to players who vary in skill level. Beginners will want to play this slot due to the simplicity of the game. It is so easy to pick up and play. But, it is not just new players who can enjoy this game. Even veterans of online slot games will want to play. This is because of the various bonuses that are packed into this great game!

There’s actually an option to check out the pay-table on the lefthand side of the screen. We would definitely advise you check it out before you start putting your hard-earned money down. This will only heighten your gaming experience. As you will able to figure out which symbols to look out for. There are only a few symbols to look out for in this game which actually work in your favour as there’s less to look out for!

You’ll also find the autoplay mode here too, a mode where the CPU plays the games for you. You can sit back, relax. Simply select, however many games you want the computer to play for you, and away you go! This feature can be stopped and started at any time — perfect for those who want to earn a bit of cash on the sly at work, maybe?

Symbols found on the board here take many different shapes. Each symbol offers something different by way of scores. It does without saying, but the joker scores the highest here — he actually has quite a few tricks up his sleeve too.

Wild: The joker symbol we mentioned is Fire Joker’s chosen wild symbol. If you match this symbol, it will substitute symbols on the grid. This means you’ll have a lot more to play with once he’s finished! Matching 3 of these symbols will grant one 80 coins, not bad when you think about it.

Re-Spin: Find stacked symbols on any 2 reels at the same time without any winning combinations and the reels will re-spin automatically. Re-spins are a great way of coming out victorious when you might not have been so lucky with the spin before that!

Wheel Multiplier: Fill all 9 spaces on the reels with the same symbol, and you’ll be given a free spin on the multiplier wheel. This is a wheel where you select at random a multiplier that will throw your scores even higher! There's up to 10x available on this wheel so pay attention!