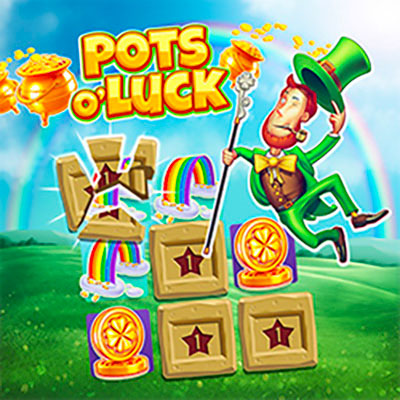 And if they're a really big believer in luck, their dream homes would be located somewhere in Ireland, where they could hang out with the leprechauns and pick 4 leaf clovers all day long. You can always feel like you're living in that dream whenever you turn on 1 of OpenBet's most loved slot games, Pots O' Luck. Accessible via any device that you could think of, your life will always be filled with luck from all of the big winnings you can make out of this game!

OpenBet has been developing and releasing video slot games for over 20 years, but they haven't faltered in delivering iGaming products with large jackpots and high quality entertainment.

The way that they product the concept, graphics, and mathematics in all of the online casino games that they developed is what made them obtain over 5 million within 12 months, over 2.4 billion plays via tablet and smartphone, and over 40 operators to supply their games to. With some of their previous games that have gained a lot of positive reviews, such as Sands of Fortune, you won't be left disappointed or empty handed with Pots O' Luck!

Your dream home will be set in the rural lands of Ireland where you'll have a sort of hobbit-themed house that's set behind your 5x3 reel grid. The base symbols that show up on your reels will come in the form of golden horseshoes, and the Pots O' Luck Logo which you will need to get in a matching combination to make a win. And if those icons are classed as the base symbols, then you should have a look at some of the special symbols that will help you amplify your prizes.

The tiny reels that you could get when you land the Caravan SCATTER on your big reels are what makes this video slot game stand out from all the others you may have played in the past. And this game is filled with so many lucky charms, you wouldn't be able to stop thinking about luck itself after you finish playing Pot O' Luck. It has a slightly lower RTP rate of 94% than your average slot game, but with the amount of BONUS FEATURES that you can obtain in this game, you'll definitely be bringing home more than what you've first bet on Pot O' Luck!