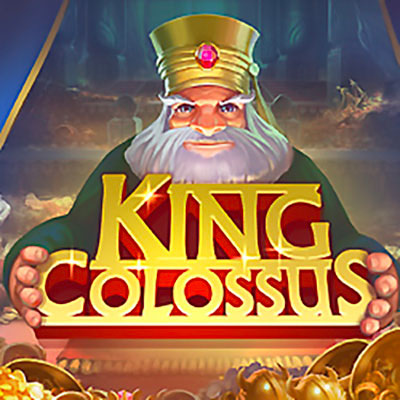 The word colossal means large or great, and therefore that’s exactly what we should expect from any slot game that hints towards that description in the title. Sure, the word Colossus also comes from ancient Greek, meaning ‘contents’ but we’re going with colossal because surely we’d rather have a king with a colossal amount of cash than a king of contents – whatever that would be.

Delve into the world of royalty, treasure, kings and queens in this King Colossus slot game, which gets you working for the big bucks with the free spins bonuses.

Quickspin are an award-winning Swedish games developer full of passionate and young crew members, who are focused on bringing fun and innovative slot games to the online casino playground. A lot of heart and soul go into their games, which is why they develop stories to go with each of them. If you want to give more of their games a go, try out Pied Piper and Rapunzel’s Tower – which follow on from the fairytale theme, much like King Colossus.

The king is showing off his wealth in this game, with the reels (and some of the symbols) set in gold, on a royal blue background, set on the backdrop of the palace. You’ll also hear a soft toned, magical and royal-sounding soundtrack in the background.

Wild symbol – the wild symbol is the front-facing gold lion, which substitutes for all other symbols on the reels, except the scatter.

Bonus wild symbol – this is the gold lion that’s facing to the right, and will only appear in the free spins bonus.

Scatter symbol – the scatter looks like it could be a doorway to the palace, but it can also be spotted with the word ‘scatter’ written across it. Land three of these in one spin and you’ll trigger the free spins bonus.

Although a nice, straight forward game, the King Colossus slot has no real excitement when playing the game. The free spins bonus is quite fun, but it maybe needs some more animation/another free bonus round to amp up the energy. This is still an enjoyable game that players will enjoy if they want to take some time out from the heavily animated/too-many-bonus-rounds games.