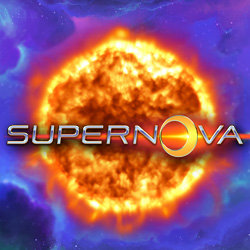 From the creative minds at Quickspin comes Supernova, a intergalactic-themed online slot that showcases the stellar potential of this up-and-coming studio.  On first glance it’s clear that Supernova is a different kind of online slot.  The game-board is split into two sections, one a three by three area with 27-pay-lines and the other a two reel set of Multiplier Reels for wins of up to 100x your stake.  The astronomical RTP of 97.05 is another reason to get excited about this other-worldly game.

Quickspin are a relatively new online games developer who produce stylish, creative content for online casinos and free games for social markets.  The ethos at Quickspin is about loving to play the games and translating this passion into creating new titles.  Their portfolio is already impressive with titles including Northern Sky, Pied Piper and Rapunzel’s Tower quickly becoming favourites with many gamers.  Quickspin’s CPO attributes this success to the staff enjoying online games:  ‘We make the slots we love playing ourselves; we’re just lucky that others share our taste.’

Players will immediately notice the beautiful transparent reels fixed inside a cosmic multi-coloured supernova.  Symbols resemble something out of a science experiment with globular purple, green and pink elements for the lower symbols and larger fiery green, blue and orange spheres representing the premium symbols.  When winning combinations hit the elements explode in balls of flame which looks fantastic and enhances the theme.

Wild symbols are a large light blue sphere with yellow lettering and substitute for all symbols except for multipliers.

Every win on the initial three by three game-board triggers the two Multiplier Reels to begin spinning.  The win will be multiplied by the multiplier (2x, 3x, 5x or 10x) that appears on the middle position of the first Multiplier Reel.

If another multiplier lands on the middle position of the second Multiplier Reel then the win is multiplied by that multiplier as well for potentially massive wins.  As eachreel can multiply wins up to 10x, you could be taking 100x your stake back to your home planet.

However, hit a wormhole on either of the middle positions and the Multiplier Feature ends, sending you back to Earth with a bang.

Although many gamers may not have heard of Quickspin, Supernova is proof that this company isn’t just a flash in the pan.  When developers change the traditional format of the game it can sometimes be a bit of a gimmick but this is definitely not the case here.  The spacey visuals and ambient soundscape set a perfect tone while the Multiplier Feature adds an extra dimension of excitement to the gameplay as you look to spin those 100x total multipliers and set a path towards that 25,000 coin jackpot.