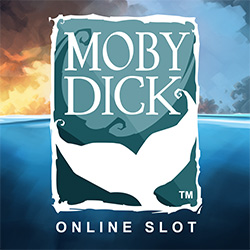 Whether you've actually read Herman Merville's most famous novel or not, the story of Moby Dick is one that everyone in the world knows about, and one which is impossible for people to not be familiar with.

The people behind Rabcat must have read the book and got inspired to create an amazing online slot game that will make players win massive prizes, and make them buy the book from their closest book store or from Amazon. Once you've finished playing this game, you might find yourself acting out as Captain Ahab, the man that sails through the treacherous seas to kill the ominous white whale in your sleep!

When the world of casino gaming made a massive boom in the new millennia, around the time when the internet was invented, so did the number of developers getting into the industry and producing fantastic iGaming products that can be accessed wherever you are.

Based in Vienna, Austria, Rabcat has built a niche skill in progressive games that enable the players, like yourself, to amplify their winnings as they spend more time playing their products, along with putting in a bunch of BONUS FEATURES that boost those winnings even further. With some of the amazing praises and reviews Rabcat has received on games such as Frozen Diamonds, Space Adventure, and Fruit Stars, your time playing Moby Dick will not be a waste!

To stick to the traditional slot theme and not confuse you on where you should look on the screen, Rabcat has implemented a 5x3 reel grid where you will aim to get your matching combinations on. The grid is set on the ship's deck with the seawater swaying from side to side as that brings the morbid atmosphere that the novel also has to life.

The base symbols with low payouts come in the form of the classical card values that you may have already seen on other slot games, which are the 10s, Js, Qs, Ks, and As. The base symbols with high payouts come in the form of the prolific objects and characters from Moby Dick, which are the ship's wheel, the anchor, and the inside of the whale's mouth that looks like they belong to a horror-version of Free Willy! There are a couple of special symbols and features that you should watch for while you're on your adventure to capture the white whale.

This online slot differs a little bit from the classical slot games you may already know as it doesn't have any SCATTER symbols to present on the reels. But with the amount of free spins and re-spins that you could win in this game, you'll always have a chance with winning more than what you'd first expect on Moby Dick? Why don't you try to slay the white whale and bring home some prizes today? You can easily access the reel grid and the sea via your laptop, tablet, and smartphone!