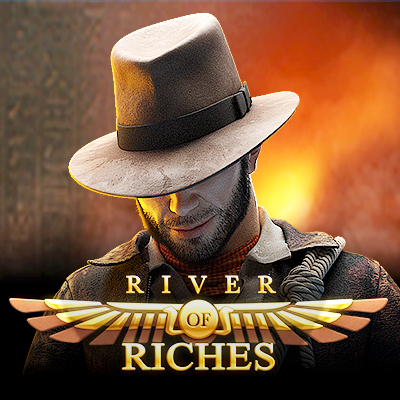 This online slot game takes you back to the lands of ancient Egypt where the majestic pyramids are tombs to the sacred Pharaohs and the hieroglyphics show the sacred God’s and mystical tales. The highlight of the theme is the majestic Nile which is graphically visualised to give you the feeling you are in the heart of this impressive part of history. The theme is adapted to a standard 5 reel slot game with the addition of a single bonus round which encompasses free spins.  The historical game is easy to play as there is not a lot going on but it is an enjoyable theme to immerse yourself into! The River Nile is famous for being the longest river in the world and its name stems from the Greek word Neilos, meaning valley but the ancient Egyptians called it the river Ar – a bit of history goes a long way in setting the scene wouldn’t you say?

Rabcat are based in Vienna, Austria and have proved themselves to have a strong name in the gaming industry since 2001. They specialise in IGaming with high quality contents to keep players amused and engaged whilst playing online slot games. There is no need to download any of the games as they are designed to be played online. There are a variety of online slot games to immerse yourself in with rather enchanting themes.

Some examples of Rabcat’s work include:

The symbols include a Pharohs mask, an intriguing scab beetle and a sunset over the majestic pyramids. Other symbols include standard playing cards. The Pharoh’s mask will pay out up to 40x your original bet, Ankh’s pay out 20 x and the beetles 10 x.  A shiny, red jewel is the symbol that will produce a free spin round and also acts as a scatter symbol which pays out for 2 or more symbols on the reel. You can get 50x your total bet for 5, 10x for 4, 4x for 3 and 2x for 2. Look out for the Wild symbol which will replace any other symbol, except for the jewel. You will get between 1 and 4 wilds which will remain throughout the bonus game!The game has 25 win lines that can be chosen by the player. The coin value can also be set.

This slot is highly entertaining, bringing history to life with its quality graphics and even the music engages players to relax, sit back and spin. This is made even easier with the auto spin feature! That said, the winnings are not huge and it is rather simplistic in nature. The bonus rounds are well portrayed through dramatic flames and changing music which makes iteasy to engage with the theme. For example, the wild cards are represented well but the quality of the graphics is taken away through limited value in terms of adding to the overall jackpot! Still, it’s an easy and enjoyable game so why not sail back to the ancient times of the Egyptians, enter the dead King’s tomb and see what treasure lies beneath!