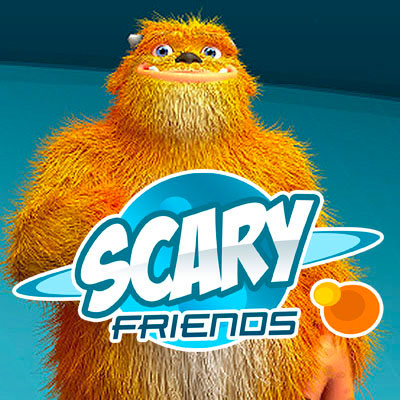 While the title of this online slot may suggest differently, the player will be greeted by a host of friendly-looking monsters brought to live with incredible detail. The colourful balls of fur bounce around while you play and the tall blue monster gives the player a friendly wave - far from scary!

The laughs don’t stop there, with additional animations and effects in both a bonus game (spinning monsters) and in a free spins round.

As is the staple of Rabcat slots - the 3D graphics and animations of the monsters on display are second to none with unique reactions playing out depending on the size of the player’s win. So check out Scary Friends today and see what all the fuss is about!

Austrian developer, Rabcat, has been involved in iGaming since 2001 and has become known for the incredibly high level of quality seen throughout their portfolio.  Graphics, sound design and gameplay for all their slots are detailed and engaging.  Their progression system often means that Rabcat games stand out from the crowd as the longer you play, the greater the reward will be.

If you find these monsters truly terrifying however, there is no shortage of other great Rabcat games to try out, including Forsaken Kingdom – hosted by King Arthur himself or Castle builder where castles are built in real time before your very eyes as your progress through the game.

Effects and visuals aside, ‘Scary Friends’ is a 5 reel, 3 row slot with 25 win lines. It is possible to play from just 1c per line, or 25c per spin. The symbols are less elaborate, with four types of monsters and playing card symbols.

The blue monster on the side of the screen represents the ‘Wilds’, and should the player land several wilds, it will often result in a lot of winning combinations at the same time. The free spin symbol presents one of the adorable furry ball monsters, while the bonus symbol is divided into 4 and shows one of each of the monsters.

If the player get 3 or more of the free spin symbols, the background of the reels change and a set of scales appear. One of the monsters will then bounce on it. The number of bounces results in how many free spins the player gets.

The second bonus requires 3 or more of the bonus symbols and involves choosing which of the 4 monsters strapped to a spinning device will be thrown off last. The cash prize awarded depends on where your chosen monster ends up. Poor things!

Scary Friends is a visual treat for the eyes, with brightand colourful monsters interacting with you from your first spin.  It’s a tongue ‘n’ cheek experience with a flair for presentation, however those looking for a slot with more volatility and options should look elsewhere for their kicks.