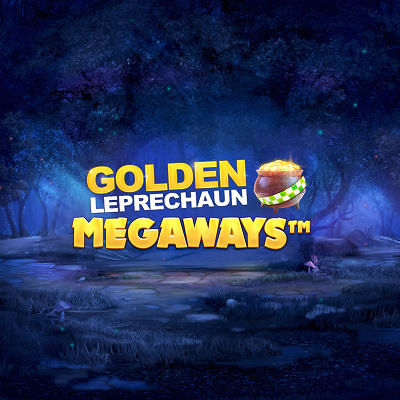 Feel as though you’re in an old Irish folklore tale as you spin the reels in Golden Leprechaun Megaways. Make friends with the little cheeky leprechauns, adorable fairies and funny goblins and join them on their mission to find the pot of gold at the end of the rainbow.

Golden Leprechaun Megaways is a 6 reels and up to 117, 649 ways to win slot with an Irish theme. This charming online casino slot by Red Tiger Gaming is filled with lucky features including a free spins feature and a random wilds feature that offers many golden casino games rewards.

The leprechauns will be leaping for joy if you manage to find the pot of gold at the end of the rainbow! Begin your search for gold in Golden Leprechaun Megaways, a 6 reel and up to 117, 649 ways to win slot by Red Tiger Gaming.

Visually, Golden Leprechaun Megaways looks very fairytale-like. The reels are placed inside a beautiful meadow which shines and sparkles from the rainbow above. Symbols include pints of Guinness, rosettes, magic books, and lucky four-leaf clovers.

The Highest Paying Symbol - The rosette is the most rewarding symbol in this slot. You will receive 50x your stake for landing 6 of these on a line.

The Lucky Leprechaun - At any point during the game, the lucky leprechaun will appear and check how you’re doing in your search for gold. The leprechaun will then show you 3 mushrooms. Simply select 1 to reveal the bonus feature you will play.

Lucky Ways Feature - In this feature, symbols can be swapped so that a winning combination is guaranteed.

Random Wilds Feature - Wilds are randomly added to the reels.

Wild Stacks Feature - Up to 4 stacks can cover the reels which all come with multipliers.

Lucky Spins Feature - Activate the lucky free spins feature by landing 3 or more lucky spins symbols. You will instantly be awarded 5 free spins. Again, you’ll be presented with 3 mushrooms. of which you will then need to choose one to reveal the bonus feature you will play. What’s great about this feature is that it can be retriggered to win even more free spins.

Red Tiger Gaming is an Isle of Man-based online casino operator that is fairly new. Although they are relatively new to the iGaming industry, they have made huge waves with their unique and mesmerising slots. Focusing on cutting-edge software, they allow players to have a smooth and enjoyable experience that will make them want to come back time and time again. If you enjoyed Golden Leprechaun Megaways and want to see more of what Red Tiger Gaming has to offer then check these titles out next:

You can never get bored of an Irish-luck themed slot. They’re always so fun, fairytale-like and rewarding! The cartoon graphics look amazing and the Irish soundtrack creates a fantastic atmosphere. You can get some nice wins in the wild stacks feature and lucky free spins feature. The top prize up for grabs in Golden Leprechaun Megaways is a golden 10, 000 times your bet.