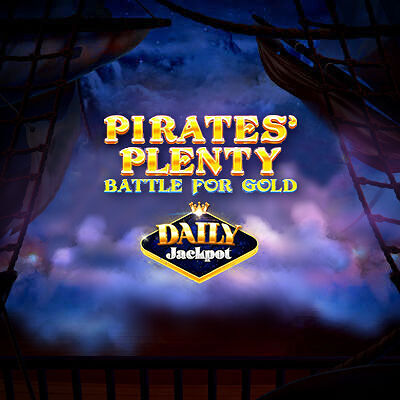 The Jolly Roger is about to set sail so hurry and hop on board on this online casino! The ship is about to take a trip around the world, stopping off at treasure islands where lots of loot can be found. With your fellow pirates and trusty parrot sidekick, you’ll be surrounded by gold coins and jewels in no time.

Pirates Plenty Battle for Gold is Red Tiger Gaming powered casino games slot with 5 reels and 20 paylines. As you have probably already guessed from the pirate characters and treasure that covers the reels, this slot has a pirate theme. There are lots of hearty features fit for a pirate in Pirates Plenty Battle for Gold including a wild island row feature and a battle free spins feature.

Ready for a pirate adventure? Aye Aye Captain! Pirates Plenty Battle for Gold is a 5 reel and 20 payline slot by Red Tiger Gaming with a pirate theme. The design is fantastic with the reels set inside the luxurious Jolly Roger which is overflowing with coins collected by Captain Jack Sparrow and his fellow pirate friends. Symbols include a cannon, a pirate’s hat, a skull and crossbones, bottles of rum, pistols, bombs, and gold coins.

The Most Rewarding Symbol - The highest paying symbol is the skull and crossbones. You will receive 30x your bet for landing 5 of these on a line.

The Wild Symbol - The wild symbol is the cheeky monkey. He substitutes all other symbols apart from the scatter to help you generate a win.

Wild Island Row Feature - Notice the meter at the top of the reels? This is important in the wild island row feature! When you get a map symbol, the ship at the top will move one space. The more map symbols you collect, the closer you will be to the treasure-filled destination. A new row will be added once you have reached your destination.

Wild Monkey Feature - The monkey will remove all low-value symbols from the reels increasing your winning potential. You will then be able to re-spin with all of the high-value symbols that remain.

Battle Spins Feature - Trigger the battle spins feature by landing 3 scatters. Once in, you’ll be given a set amount of free spins. Captain Blackbeard will throw bombs on the reels which will cause the symbols that are hit to remain wild.

Their number one aim is to entertain and keep players coming back for more. All of their slots are filled with bright and beautiful animations, top-quality audio, advanced technology, and unique themes that you can’t find elsewhere. If you want to see more of what Red Tiger Gaming has to offer then make sure to check out these titles:

If you love a good adventure then Pirates Plenty Battle for Gold will be right up your street. The design is incredible with pirate coins flying across the reels every time you win. As well as a cracking design, Pirates Plenty Battle for Gold has great upbeat audio and an excellent range of features. With every spin in this Red Tiger Gaming slot, you have the chance of winning up to 5, 000x your stake.