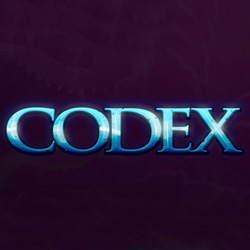 Codex Jackpot is a five-reel, 20 pay-line online slot game from the creative maestros at Spieldev.  Inspired by brainteasing books like The Da Vinci Code, Codex Jackpot incorporates clever dismantling and reassembling reels so individual symbols can spin on their own adding an extra level of uncertainty and excitement to the game.  Spin the reels to try and decode the Cryptex and win up to 1062x your stake.  Also look out for the Free Spin feature which can be retriggered indefinitely….

Spieldev is a relatively young team of exceptionally talented game developers who like to push boundaries and create games that are out of the ordinary.  Based in Argentina, Spieldev pride themselves on understanding what players want because they enjoying playing games themselves.  There portfolio of games is continuing to gain traction in the online gaming world with a number of games awaiting imminent release.  In the meantime, make sure to check out Quake and Fruity 7.

Codex Jackpot is a great looking online slot with steampunk aesthetic sensibilities and a generally cerebral feel.  The game-board looks like a metal frame found in an old scientists lab.  Although lower value symbols are represented by the playing cards 9-A, higher value symbols include coloured geometric elements.

Spin three Invention scatter symbols and then pick a random multiplier to win up to 6x the winning pay-line.

Win seven, eight or ten free spins in this Free Spins bonus round than can retrigger indefinitely.

These sticky symbols are activated during the Free Spins feature and can cover the whole game-board for cash wins to beat any Eureka moment.

Spin two Vault Bonus symbols (in reels two and four) to triger the Vault Trail Bonus.  The locked Cryptex box will then appear and it is your job to unlock the vault by spinning the reels.  You will be awarded one more spin for every correct symbol you find and may be given the option to buy a respin.  Unlucky codebreakers who fail to crack the first reel will still walk away with 5x their stake.

Although Codex is available on mobile devices, the gameplay and graphics can lag a little compared to the desktop version.  That said, it’s definitely still worth a spin.

Codex Jackpot is a beautifully imagined and ingenious code-breaking themed game which will appeal to anyone who likes a challenge.  It is a relatively high variance slot with the Cryptex puzzle box offering payouts of up to 1062x your stake to those who can crack the code.  Players who enjoyed this game should definitely check out Fruity 7 and Quake, also developed by the gaming brains at Spieldev.