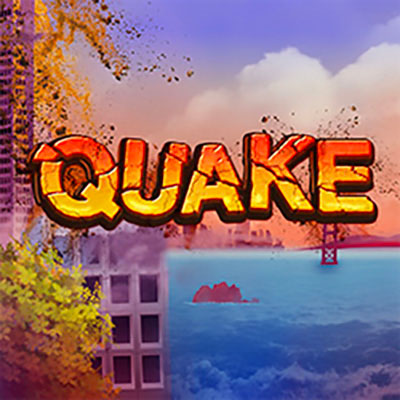 There's nothing that can keep a person at the edge of their seat than a good disaster movie that's caused by a natural event, especially when that movie is set in a busy city with loads of people running for their lives!

That is what Spieldev had in mind when they decided to put their creative heads together, and develop the exciting online slot game, Quake. Set in the heart of a thriving city, your aim is to make sure that you get all the civilians to safety and avoid all of the disasters that the earthquakes could throw at you. And while you're saving those civilians, you'll also win a load of prizes that will make you feel happy after running away from all those quakes!

When you see an iGaming developer that has a lot of potential in making it big in the thriving casino industry, you want to contribute as much as you can to make sure that their brilliant games get exposed as much as they can. Only being established in the market since 2016, the Argentinian developers, Spieldev, show that the quality of an iGaming product is more important than the amount that a developer would produce.

And the quality of their games is what landed them with their first partnership with Leader Games, which enabled the to reach their games out to a wide range of players that have different interests. If you're still sceptical on how good Quake, just have a look at the great reviews that players have left on some of their other games like Codex and Fruity 7.

In the background, you'll see a bunch of buildings tumbling down and a few offices on fire, which adds to the disaster theme that the developer has set for this game.

You'll see the fire-fighters putting out the blazes, police officers trying to get people to safety, newswomen trying to report what's happening right in front of your eyes, and people crying out for help from the window tops, which are all of the high paying base symbols that'll appear on your reels. The traditional card values of 10, J, Q, K, and A are your low paying base symbols.

Like in most of the disaster films that you may have watched in the past, it's never a straight line when you want to try to get to safety. But don't worry, all of the special symbols that can also land on the reels will help you get the extra winnings that you'll be having your eyes on.

It's important to note that on the Earthquake BONUS FEATURE, you'll see a spin counter that will countdown from 25 to 0, which indicates the amount of time you'll play on this feature. You'll progress up the levels every time you land the Earthquake Sign SCATTER on the 3rd reel.

The Earthquake BONUS FEATURES can be considered to be the best feature, along with the WILDS pattern that Quake has to offer. And how could they not be the best features in the game? They help the players boost their winnings in a very unusual, but exciting way.

Why don't you give Quake a shot on your laptop, tablet, or smartphone today? It's high RTP rate of over 96% will make you arrange to have some time to yourself to play the game, and be the hero in your this natural disaster story!