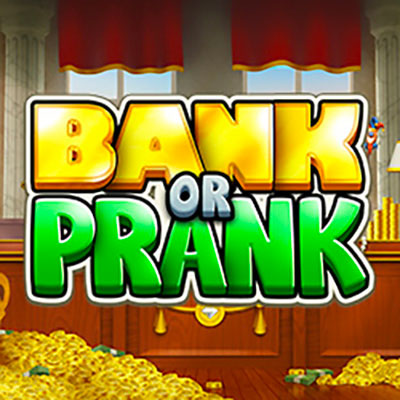 Bank or Prank by Stake Logicis a fun and entertaining video slot machine presenting players with5 reels and243 ways to win.The theme matches the slot title where you play for cash or a joke.Stakes start from between 40p and £40 per turn.

A jolly jester is making an attempt to run off with a stash of loot in this Bank or Prank slot.This online slot game has some good base game features, but to activate the special bonus players will need to collect the mystery symbol and crazy wild symbols.

Stake Logic is a fairly new name in the e-gaming world which means that most of its titles aren’t available to play at every online casino. However, the company is making attempts to fix that through signing a deal with the Unibet Groupwhich will roll out Stake Logic titles in its online casinos.Unibet is one of the most respected names in the gambling industry.They haveclearly appreciated the freshness and uniqueness of slots by Stake Logic.

The slot background features a traditional banking establishment setting. The game symbols resemble several different aspects of money and jokes.The old bank building has been renovated and looks a bit flashy so be on the lookout for jewel and crown statues. Everything here is bright and cheerful and so is the soundtrack.

The reels feature card symbols made up of banknotes. Other symbols include; a jolly jester,a bag of cash, a cigar-biting banker and a security van. The highest paying standard symbols are the Prank orBank logo. These offer payouts of up to 400 coins if you hit 5 on successive reels. Bonus features include;

Bank or Prank has a medium variance with potential wins going up to 1,822x your stake per spin.Bank or Prank it’s a good slot with good design and impressive features and a couple of decent features.The game has succeeded at the entertainment aspect and punters will love that there are so many chances to win in this one.