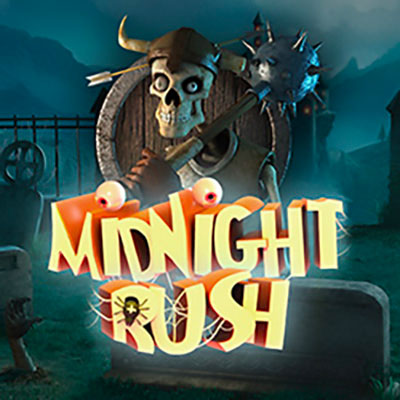 Midnight Rush by Stake Logic is based on a horror theme.This ghoulish graveyard needs only thebravest punters to venture into it. Are you ready to enter the dead of the night? This is a 5 reel, 10 line slot. It featuresa top notch design with exciting bonuses likemultipliers,pick me rounds, and more.Stakes start at 10p to £50 per spin.Play it on all your mobile devices now, but not before getting through this review.

Stake Logic was formed in 2015 in the Netherlands, which makes it a rather new addition to the online gambling industry. The company is slowly getting a reputation for creating the boldest and most visually appealing slots in the modern e-gaming world.

Stake Logic has a selection of slots that fit classic themes modelled in AWP style. All of these have been designed similar to land-based arcade slot machines.However, these are not the 3-reel retro themed games you’re used to. One exampleis Game 2000 which has mystery wins, a twin set of 3-reels and many scatter symbols.

All the ghostly action in this slot is set in a graveyard. The setting couldn’t be anymore creepier- the cemetery lies right beside Dracula’s castle with the reels bordered by a pair of giant trees and ripping candles on either side. The A to 10 card symbols have the lowest and have been designed to look like gravestones.

Other symbols include a club-wielding skeleton,a mummy escaping from its tomband the Dracula. The werewolf is the most rewarding symbol with payouts going from50, 200 to 800 coins whenever you manage to land 3, 4 or 5 of them on a payline.Other features include;

Midnight Rush doesn’t have any free spins which could be a little disappointment for many punters. Don’t get too discouraged though. The multipliers make up for the lack of free spins whenever they land randomly on every spin in the base game. This keeps things exciting.

Midnight Rush isn’t full of bonus features, but it’s still a highly enjoyable and playable slot. Stake Logic never fails when it comes to graphics with this one having a creepy and fitting cartoon design. The slot’s soundtrackcomplements the theme perfectly. Wins can go up to 4,800x your stake thanks to those multipliers.