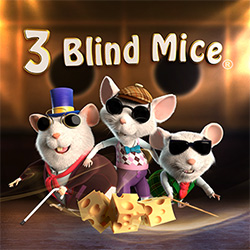 Almost everyone who’s ever been through nursery knows the famous nursery rhyme- the 3 blind mice. It was the tale of the mice that chased the farmer’s wife and she ended up cutting off their tails using a carving knife. Players have a chance to live this rodent adventure the 3 Blind Mice slot by Leander Games.

Your task in this 5 reel, 20 payline slot is to head to a bakery where you’ll indulge in all sorts of yummy treats and bonus features like multipliers, wilds, re-spins, thrilling bonuses, etc. payouts of almost 100x your stake await you.

Leander Games has only been operating since 2008, but their range of polished slots would have you believe they’ve been around for years and years. The company has various innovative themes in their slots. This software house operates in Buenos Aries, Argentina. Leander already has business partnerships with a lot of the major casinos and software development establishment in the industry. Their video slot titles don’t need a download as they use browser compatible tech and downloadable options as well. This enables many popular large gambling sites to add Leander games to their portfolios, which makes Leander slot games available to larger audiences. Leander slots are currently not available to USA players.

This is a highly animated slot that’s done a good job at portraying the bakery setting. Delicious treats sit at the window with the sweet aroma of freshly baked goods attracting the 3 blind mice who can’t resist having a nibble.

Bets start from as 1.00 to 20.00 max. The paylines here are fixed, but the wagers allow punters to play for limited stakes. The 3 mice characters are sitting at the left of the reels ready to pounce, but the farmer’s wife usually appears randomly on reel 3.

Other game symbols include wheat bags, garlic cloves, a till for sales, sausages and foods. Other symbols include the classic set of card values designed to look like cheese, pretzels and other types of delicacies. The maximum wins up for grabs in the base game include 25x your stake. Land 5 matching tasty symbols and you win multipliers. Card values award multipliers of 2x and 7.5x.

The game has several bonus features that can be triggered at random.

3 Blind Mice isn’t your typical slot because it includes never before seen features. Make sure you watch a demo video before playing so that you don’t get lost in all the new features. It’s a medium to high variance slot, although most of the wins come in lower amounts. The game doesn’t feature any free spins, but the re-spins make up for that in their regular occurrence.