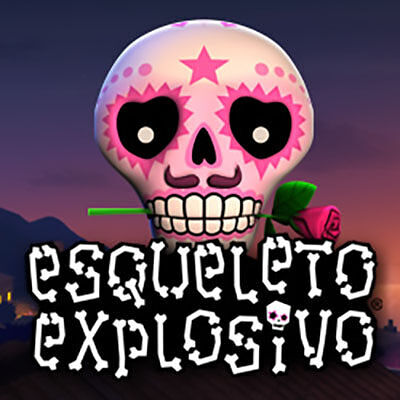 What’s the most memorable live band experience you ever had? Bet it won’t compare to the one in this EsqueletoExplosivo slot by Thunderkick. The game is based on the Mexican Day of the Dead which is similar to the concept of Halloween. EsqueletoExplosivo is Spanish for ‘exploding skeleton’. It’s a 5 reel, 17 payline slot featuring a spectacular design and a very entertaining theme. The game features exploding wilds, 32x multipliers, dropping symbols and more. Start your stakes from 10p to £100 per turn. EsqueletoExplosivo is the first slot by Thunderkick available to play on all mobile devices.

Thunderkick is a young company aiming to create slot games which set themselves apart from what’s already in the market. They tend to use different ideas and themes in their slots with a common factor being a high dose of humour in all of them. Their games are mostly browser based, but they are slowly shifting to mobile. They have a small catalogue of games that are available in a majority of online casinos around the world.

Instead of applying usual on-reel mechanisms or elaborate bonuses, Thunderkick implements innovations that go in line with their slot’s theme. For example, in a game about skulls EsqueletoExplosivo, the singing skulls roll towards the player and are replaced on every spin. In Fruit Warm, fruits are thrown at a wall.

The opening scene is a night backdrop with a beautiful view of a Mexican mountain town. There’s local music playing and a gorgeous sky lit up by fireworks.EsqueletoExplosivo features brightly coloured skulls in place of traditional spinning reels. The skulls drop onto The Boners mariachi band led by Enrico Mortis. There are five music-playing skeletons. The aim of the game is to form matching skull combinations. If the skulls don’t form one, they all fall to the floor and are replaced by another set of 15 skulls. That will also happen every time you hit spin.

Each of the skulls is set apart by different coloured patterns, moustache sizeand a varying number of teeth. Skull symbols include the pink skull, which pays 2.5x your total bet amount, the green one worth 1.4x your total bet, the blue one worth 1.2x, orange worth 0.9x and turquoise skull which pays 0.7x.

When 3 or more skulls form a winning line, they start singing and then explode, leaving room for more to fill the gaps.This could create successive wins with each leading to higher and higher multipliers. If you make it to 6 wins in a row, the multiplier become a massive 32x.

This slot is extremely original and entertaining. It will get players hooked from the very beginning, despite lacking all the usual bonus features players are accustomed to. Not only will you laugh your way through the reels, but to the bank as well. The payouts are great if you can get those successive wild wins and multipliers. The creativity, flow, gameplay and entertainment factor are all at an all-time high in this slot.