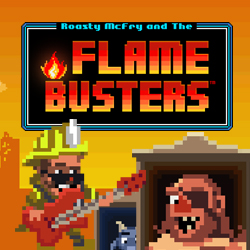 Firefighting has never been this glamorous! Enter Flame Busters: the online casino slots game where you’ll fight your way through one flaming inferno after the other, earning massive coin all along the way. Another stellar production from the team from Thunderstruck, expect a raging good time, set out in an instantly endearing pixel art design.

Flame Busters is a 5 reel slot with 3 rows, and with an epic 243 ways to win. Your winning combinations can come together as long as you land matching symbols on any (adjacent) reels, so players can expect to see a steady trickle of wins in all their games.

Flux was developed by Thunderkick, a prolific creator of online slots games based out of Stockholm, Sweden. Their design motto is to create games that enhance the experience of players of online casinos. Over the years Thunderkick has created many popular slots games that have seen great success such as:

The first thing that will grab you is the darling pixel-art design that the game is rendered in. This is sure to give players a rush of nostalgia, of the days long past in arcades. All the symbols on the reels are reminiscent of the mainstay characters from early videogames. You’ll find robots, wizards, pirates, even a couple of aliens, all inexplicably trapped in burning buildings and in need of timely rescue. The lower value characters are represented by letters of the alphabet; this may not make the most narrative sense, but it is interminably endearing regardless. Coupled with a similarly old-school soundtrack, Flame Busters could just be a winner right out of the box.

More than just tight visuals and audio, Flame Busters also has some inspired gameplay behind its pretty veneer.

The Wild symbol in this game is a bold, orange W, which will replace all other symbols (except for the Scatter symbol, the Alarm Bell), to create winning combos for the player.

When you land three or more Alarm Bells, you are rewarded a commensurate number of Free Spins – up to 20, maximum. Furthermore, you can accumulate more Alarm Bells during the spins, giving you more spins and accelerating the game’s momentum and excitement considerably.

There are also unique Fire symbols that appear from time to time, that transform reels into matching symbol (except for Wild and Scatter), and add another level of opportunity to the game.

The Fire Drill is another randomly-occurring event that changes some of the lower value reels into Fire symbols. There no shortage of excitement when it comes to the reels in Flame Busters.

Flame Busters has plenty of style and a surprising amount of substance. There’s a fair bit of complexity to the game and the various mechanics work very well together to keep a constant, exciting pace throughout your time playing. Even if you aren’t a fan of old-school games or aren’t looking for an excellent tribute to the days of the arcade, you will undoubtedly find something to love in this well-constructed game.