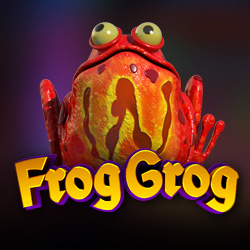 Frog Grog is an online casino slots game by developer Thunderkick. The game has a scientific mystique to it – littered with potion bottles with organs inside them.

Developer Thunderkick has made the bold decision of doing away with the Scatter symbol and the Free Spins Feature. Instead, this online slots game offers you high returns with growing multipliers with consecutive wins. The highest multiplier is 7x, which gives players 1,616 times their stake on each spin.

Don’t be alarmed if you have yet to hear of Thunderkick. They are relatively new, established in 2014, but that is not stopping them from building a name for themselves.

A notable aspect of Thunderkick is that they don’t just release games to build on their game count. A significant amount of time can pass between the launch of new games, which clearly indicates that they value quality over quantity. Some of their games include:

Frog Grog has just the right amount of slime, creep, and fun. It blends the idea of potions and sorcery with gambling and winnings.

The online slots game offers Growing Multipliers and Dropping Symbols, keeping you in a trance as the reels croak away.

The Orange Frog symbol represents the Wild symbol in this online slots game. The Orange Frog can be used to replace all the symbols in order to form a winning combination.

Upon landing a winning combination with the use of the Wild, the Wild symbol will burp away all the symbols of that reel and row. This clears up positions for new symbols that increase the chances of forming more winning combinations.

Furthermore, the Wild frog turns blue and acts as a Wild for the remainder of the spins, until it contributes to a winning combination.

This feature allows for multiple wins from the same spin. The symbols that form a winning combination are removed and replaced by new symbols. If luck is on your side, you could win yet again without having to spin again.

To make this feature even sweeter, every additional winning combination within the same spin is accompanied with a Multiplier. So the more consecutive wins a player manages, the higher the Multiplier.

This feature is triggered randomly to further increase players’ chances of forming winning combinations. The Mystery Game is only triggered if you have not landed a win. In this feature, all the symbols except 3 – Moth, Flower, Frog – are instantly removed. With the game only featuring 3 symbols, players will find themselves with a much higher probability of landing winning combinations. This feature (much like the Dropping Symbols above) also entails growing Multipliers!

Frog Grog is a medium to high variance game. The slots game has a wide betting range (£0.10 to £100), which can translate to very big wins. Although on an initial glance the lack of Free Spins may turn away avid slots players, the 7x Multiplier and additional features like Dropping Feature and Mystery Game more than makeup for it!