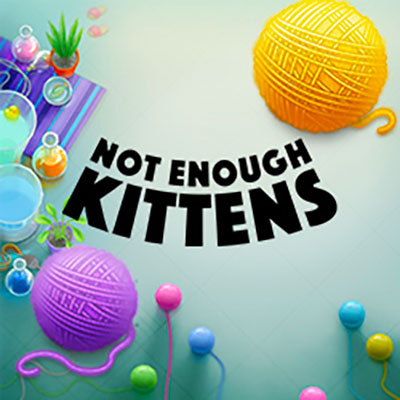 Cat lovers have finally found a slot to match their philosophy- Not Enough Kittens. Not Enough Kittens is 5 reel, 35 payline Thunderkickslot that celebrates these furry and cuddly creatures. The game’s stakes start at 10p to £100 per spin. Your mission is to save the kittens here from Professor Catarina’s grasp.

There’s plenty of furry bonuses in here like stacked wilds, free spins and more. You can play the game across all your devices.

Thunderkick is one company that’s known for always thinking outside the box when it comes to their slot design. Instead of applying the expected on-reel behaviour or complex bonuses, they add innovations like rolling reels, different design elements like in Not Enough Kittens, and so on. The core of slot games like wilds, free spins,lining up wins, etc. are already in place., but the challenge and innovation comes when one can take those same features and reimagine them.

They also master in-game features like their configurability, which not even the most successful software houses can match up to. Players can adjust game sound, speed, etc. in different ways.

Not Enough Kittens is based onProfessor Catarina Kettingur’s lab. She’s holding her favourite kitties hostage in a box as she spins them on a conveyor belt.

The slot gives you a bird’s eye view of the all the kitty action at Professor Catarina’s P.U.S.S facility where she heads the Science division. Not Enough Kittens slot has a gentle soundtrack accompanying the action with symbols of cats on the reels. There’s4 cats and 5 different coloured balls of yarn that the professor uses to keep the kittens entertained. Each cat can also appear as a double symbol.

The whole premise of Not Enough Kittens is a bit strange. The visuals are also a bit strange, but the payouts are anything but.The double cat symbol wins can go up to 100x your stake on each line, but the chances of that happening are low. Bigger wins are more likely to come from the bonus game through the stacked wilds.

Not Enough Kittenshas a medium variance with the highest win going up to 3,650x your stake. It’s possible to land it oneach spin as well as free spin.