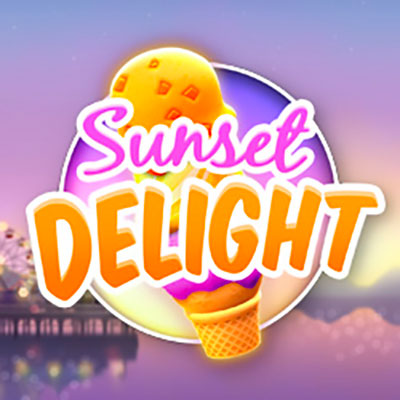 Not a slot for those on a diet, Sunset Delight is a delicious looking ice-cream themed game from industry trailblazers Thunderkick.  Seasoned gamers will note the original layout of the game-board which is made up of three ‘reels’ and five pay-lines.  However, instead of reels there are three ice-cream cones at the bottom of the game-board which are each filled with three scoops/symbols with every spin.  This format works particularly well during the Free Spins round where players can glut on extra spins and big multipliers.

The delightful American parlour feel of Sunset Delight coupled with a high RTP and an original game-board make this slot almost as enjoyable as an ice-cold scoop or two.

Thunderkick began life in 2012 as a tight-knight group of talented creatives and technical wizards with a passion for playing and creating games that could show the big boys a thing or two.  This Swedish gaming developer like injecting an element of humour into their games, but that isn’t to say that they shouldn’t be taken seriously.  The quality of their portfolio shines through in titles including Full Moon Romance, Flame Busters and Not Enough Kittens.  With their deep understanding of where the industry is headed, it’s no surprise that the majority of Thunderkick games are fully optimised for mobile and tablet devices.

With tempting visuals and a foot-tapping music track that wouldn’t be out of place in an American diner, Sunset Delight is a treat of an online slot.  The symbols look good enough to eat as each is a different flavoured scoop of ice-cream including (in order of value):  vanilla, raspberry ripple sevens and a chocolate toffee bar.  The strawberry candy scoop emblazoned with a blue ‘W’ is wild and substitutes for all other symbols apart from the triangular wafer scatter symbol.

Land three wafer scatter symbols in your cones to trigger the tasty Free Spins feature.  You will be awarded five free spins to begin with but can build up the number of spins and ‘steps’ with each spin to increase the multiplier and scoop some rich and creamy cash prizes.

Not to be confused with the orange drink with a similar name, Sunset Delight is a good looking retro-slot that is a real joy to play.  It is the creative use of cones in place of reels which makes this game so moreish, as well as the authentic American smooth soundtrack which makes you feel as if you’re sat in a traditional parlour.  Players who enjoy biting down on harder facts will be interested to know that the RTP of Sunset Delight is a cool 96.30% while the jackpot stands at 1500 coins (which translates into a lot of ice creams).