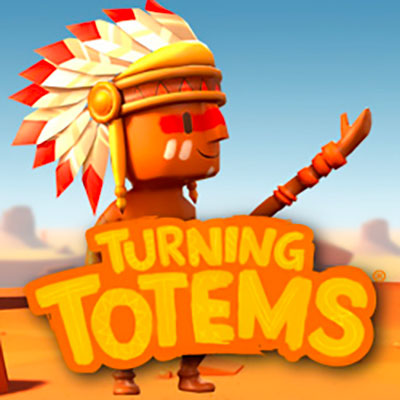 Follow your Native American guide, as he takes you through the dusty desert, with its dry plains, flowering cacti and blue skies as far as the eye can see. The mighty totem poles tower with their mysteries characters looking down on you as you wander by. The mesmerising spinning totems along with the native music and sounds will have you bowing down before the totems before long. This Thunderkick online slot game is lively, quirky and boasts some beautiful colours and characters. Don your feathered headdress and join your guide in the desert as you start to spin.

Since Thunderkick burst on to the online gaming scene in 2012, this relatively recent newcomer hasproven that age is certainly not everything when creating new and exciting online casino games. They have racked up industry experience and have cracked the code to making graphics and audio work seamlessly in their productions. They have shown what hard work and passion can achieve, through the top quality and unique titles they have released. Turning Totems is fun, quirky and really engages the player, with the colourful graphics and the alluring sounds.

Totem poles are the monuments carved by the indigenous peoples of North America and Canada, specifically found in Washington and Oregon on the Northwest coast of the USA and British Columbia in western Canada. These beautiful and often enormous structures are made by carving huge trees and they symbolise cultural beliefs of the natives. They have also been known to symbolise and commemorate important and historical events, recounting clan stories and sometimes deaths. They have also been used as signage for villages and have some functional features in building. The carvings are very personal to a proud people and due to their complexity, one must be aware of the history of the village or area that the totem pole is found in order to truly understand its carvings.

These beautiful structures are recreated in cartoon style in this fun and engaging online slot game. The game is simplistic as it is colourful and there are a few features to get to grips with.

Turning Totems is a visually pleasing, fun and simplistic online slot game. The music is pleasant while you spin and the colours are bright and engaging. Thunderkick have hit the jackpot with this slot game.