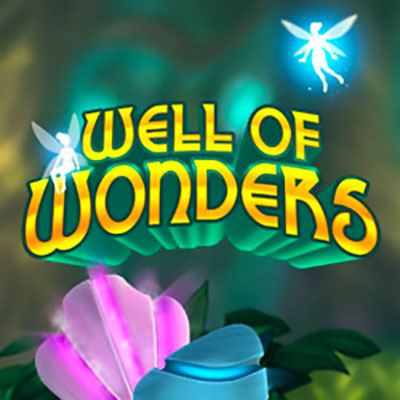 Well of Wonders is not your typical slot game at all! In fact it doesn’t even come close! Whereas your typical slot spins around a reel representing different symbols, this one comes from a well. Set in a magical forest it’s undoubtedly going to get you wondering what comes next! Adding to the mystery and magic comes Thunderkicks’ amazing game graphics and animations featuring a fairy to the gameplay. One thing is for certain, even though ‘Well of Wonders’ is an unusual set up it, it is enchanting in everyway and will draw you in with its very convincing payouts!

While most developers churn out the same old reel games claiming to be the new innovator of the gaming industry. It is in fact the unique style that seems to the true innovator when it comes to Thunderkick. They are a young company bringing out newly styled games, not just your plain reel slot games, but new themes and ideas. Both of which have been recognised in ‘Well of Wonder’, a slot game that is not atypical, but somewhat a new, refreshing change to the gaming world. Their new unique style has been a feature in all of their games and offers the player a new experience.

Some other titles from Thunderkick include:

Set in a mystical forest, the game is features 7 reels that can be played across desktop, mobiles and tablets. The game itself doesn’t include reels, it includes 7 floating stones and for a winning combination you will need 3 of the same stone. The red jewel is the best possible outcome for any player; it will give you 50 times your initial bet if you match 7 on the screen at the same time!

When a winning combination appears, new ones will replace the winning symbols. This then carries on spinning and every time you achieve a win it will be doubled. If you are a success your winning could finally reach a 32x multiplier!

While this slot doesn’t offer free spins, it is packed with multipliers and all you need to do is match 3 symbols!

Even with the unusual set up. There is no doubt that Thunderkick are innovators of the new game. With amazing graphics and magical animations, it’s different to any other game. Simply offering a more exciting and different take on slot games and it is refreshing to see a convincing payout at the end!