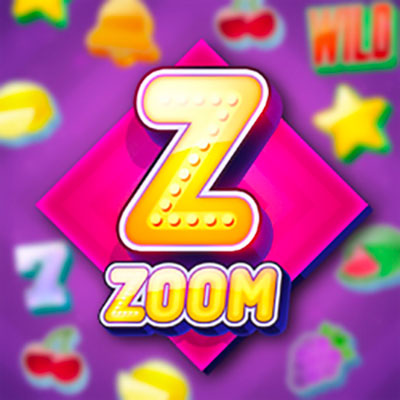 From renegade gaming developers, Thunderkick comes Zoom:  a 64-line, six-reel online slot game that melds simplicity with massive winning potential to great effect.  The game-board is spit into six zones, each 2*2.  When you spin a Zoom symbol, the zone becomes locked-in for a free spin and locking in four adjacent zones awards  a’Super Massive Respin.’  It might sound a little complicated, but the game itself is very intuitive.

Old school gamers might be reminded of the giant stage from Super Mario 3 when they see the massive symbols.  These translate into massive wins with players able to scoop up to 1500x their stake.

The Thunderkick story began in 2012 when a small but experienced group of developers decided they wanted to transform the online gaming experience.  Since then, Thunderkick has established offices in Stockholm and Malta and held firm to their ambitious mission by supplying hundreds of casino sites with original games.  Humour lies at the heart of Thunderkick’s corporate culture and this comes through in their many popular titles including:  Flame Busters, Not Enough Kittens, Barbershop Uncut and Full Moon Romance.

Thunderkick have got the aesthetics bang on with this one.  The colours are vivid and the game-board is clearly split into six 2*2 zones making the action easy to follow.  Likewise, the soundtrack takes a backseat to the game itself.

Basic symbols are taken from the plethora of traditional icons including cherries, watermelons, lemons and bells.  Watch out for the wild symbol as this substitutes for all other values except for the Zoom.  What is the Zoom?  Good question.  This symbol forms the backbone of thhe concept and can be best explained by going through the gameplay features:

If you spin a Zoom symbol in any of the 2*2 blocks zones then all four blocks in that zone will become locked in for a free Massive Symbol respin.

The locked in zone will stay in place for free Massive Symbols respins until you do not spin a Zoom symbol in another zone.

Locking-in four adjacent Massive Symbol blocks will form a vast 4*4 ‘Super Massive Symbol.’  Any wins here have huge potential with massive multiple wins and five-of-a-kind opportunities all over the place.

As you might expect from a techno-savvy gaming developer like Thunderkick, Zoom is fully optimised for mobile devices running iOS, Windows and Android.

Thunderkick have turned a very creative concept into an engaging and individual online slot.  Zoom not only offers something a little bit different, with it’s compartmentalised game-board and hugely profitable Super Massive Symbols, but it also comes with a generous RTP of 96.2%.  All too often, games can fall back on video-style graphics at the expense of imagination, but Zoom is an exercise in good old-fashioned gameplay - give it closer look.